Interviewed and written by Aaron Robinson-Editor 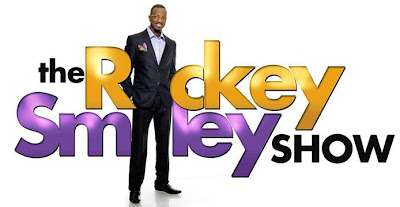 When asked who is your favorite comedian, it’s difficult to leave out funnyman Rickey Smiley in a conversation amongst family, friends and the millions of fans who love him. I was granted the opportunity to interview the hilarious comedian in regards to “The Rickey Smiley Show“, which returned to TV One for the second season with all new shows.

Smiley is known for his prank phone calls, and initially I thought I was a candidate of his joke prior to us pursuing the interview, as he reached out to me several minutes early. “Naw, Naw, Naw! I wasn’t going to do that to you,” says Smiley as we both laughed over the phone, both excited about the interview for Consciousness Magazine. The comedian shares his experience regarding having a sitcom and working with a cast of incredibly talented individuals. “It will definitely make you step up your game, you know, especially working closely with Ray J. Ray J was so experienced. That was my first time working with him. It was just a blessing, a blessing and pleasure to work with such professionals. And Roz Ryan, with all of those years of acting experience. So, I’m really the one that probably had to step up to the plate and get on with my best acting game,” says the humble and down to earth comedian. Other cast members include J. Anthony Brown, Ray J, Noree Victoria, Demetria McKinney, Roz Ryan, Jay Lewis (Lil’ JJ) Ajiona Alexus and Gabriel Burgess.

“The Rickey Smiley Show” is loosely based on Smiley’s life, which stars him as a comedian, nationally syndicated radio personality, and single father of three. I was able to catch an episode of this very comical show, where the President comes to town. Throughout the show Smiley is acting out various characters: Sister Bernice Jenkins, Clarence The Janitor, Pastor Watkins, Lil Darryl and Joe Willie. “Somebody brought the idea to me. I never thought about doing a sitcom. So I was like what, cool. I just went on and kind of jumped on it and made it happen,” explains Smiley regarding his motivation behind pursuing the sitcom, produced by veteran TV producer/director Roger Bobb of
Bobbcat Films (Tyler Perry's House of Payne and Meet the Browns).

Over the last decade or so, comedians such as Martin and Jamie Foxx has reached a level of high success in their career pursuing TV sitcoms that have become a classic in their own right, acting out hilarious characters and utilizing their comedy skills to make viewers laugh. With limited black comedians having television shows, here is what Smiley mentions as he feels that his show will fill the void that viewers has been looking for. “What we did on this second season right here, we’re trying to bring the funny. If you noticed right before my show came on Martin was going off and the laughter continued. So the laughter was the same. Martin had an absolutely great show, probably one of the funniest ever. It was just an updated version of that, of Martin, you know. The story is just about me having kids and everything is centered around me trying to solve some problems,” articulates Smiley.

For over 20 years Smiley has been a loved stand-up comedian, actor, television host, and top rated nationally syndicated radio personality. He has been known for clean comedy. His morning show “The Rickey Smiley Morning Show” based in Atlanta has reached more than 50 markets where he combines laughter, social political awareness, community outreach and celebrity news. He shares his remedy and secret to his longevity. “ Keeping it clean, keeping your name out there and staying on the radio, staying on the road, hosting shows, having fun and having a good time,” sincerely says Smiley who is the only comedian to have hosted BET’s Comic View for two seasons. He has also released eight comedy CDs compiled with comical prank phone calls, parodies and church announcements.

For those who are looking to be successful as a comedian or actor, the well-known comedian shares suggestions and advice. “Keep it clean. That’s the main thing. Keep it clean and whenever you work more and when you keep your comedy clean you open yourself up to more people. You don’t want people to not be able to allow their mother, grandmother or their kids to watch a show. You want to do something where everybody can watch together and laugh.”

For more information on “The Rickey Smiley Show” please visit www.rickeysmiley.com and TV One www.tvone.tv. Visit Rickey Smiley’s Facebook page at The Official Rickey Smiley Fan and follow him on Twitter: @rickeysmiley where he is usually on there almost all the time.

Consciousness Magazine gave some of the readers the opportunity to ask Rickey Smiley a question. The best two questions were chosen as a sidebar. Here is what the candidates had to ask funnyman Rickey Smiley:

Tamaris Barnett: Besides yourself, who is your favorite comedian alive and why?
Rickey Smiley: Mike Epps, he’s just flat out without any questions, funny! Mike Epps trip me out. Mike Epps have me crying laughing, like for real, for real! I just like Mike Epps because he’s funny. He’s great in movies and Mike is a good guy. And I wish I had that kind of humor. I have seen Mike Epps make people hurt themselves laughing! (Laugh) I toured with Mike Epps for two years and when I tell you man, that was one of the funniest, one of the best times I had as a professional. We had a good time and nobody was intimidated by each other. Everybody just go on stage and do their thing and have fun...just a pleasure to work with. I had to stand there and watch him every night because he cracked me up.

Mitchell Ledbetter: What was the hardest transition in your profession that you eventually overcame to make you famous?
Rickey Smiley: With the gist, Just the acting. A shout out to my acting coach Terri Vaughn! You know Terri Vaughn from the Steve Harvey Show. And just to get up every morning and do this radio show. That really keeps your name out there and kind of helps you build your brand or what have you. It was awesome.