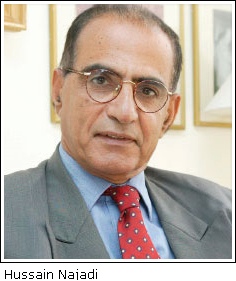 Today, Najadi is the founder, chairman and CEO of AIAK Group, who is responsible for founding the fifth largest bank in Kuala Lumpur, Malaysia, called AmBank. He became the leader in the wholesale and corporate banking in Southeast Asia, creating the Arab-Malaysian Development Bank, linking business between the Middle East, Southeast and Europe.

Hussian Najadi is here to share some insight regarding his recent published book “The Sea and Hills: The Life of Hussain Najadi”, his life struggles, as well as share words of encouragement that will empower the readers. I was honored to have an interview with such a man of wisdom and knowledge, whom changed the course of society in his homeland. His compelling life story of once being poor to having success will inspire many on a global basis.

Aaron Robinson: What do you believe has been one of your most significant challenges in life that you have overcome?
Hussain Najadi: To show that a poor boy of a small relatively unknown Island called Bahrain, [who is] self educated, and self made could achieve so much; right up to the pillars of High Finance, in Europe, USA and Asia, all with diligence, hard work, and tenacity. I always wanted to be the man who proves his willpower and uncover my own life’s true purpose and who will take readers on a life-changing journey and adventure in my dramatic life story in “The Sea and the Hills.” www.seaandhills.com

AR: What inspired you to write “The Sea and the Hills: The Life of Hussain Najadi”?
HN: The legacy of my life must be recorded and published not only for the members of my family, but for the many many poor children now currently disadvantaged, living in slums all over the world. I wanted my book to become a beacon of hopes for these destitute persons the world’s over.

AR: When readers read “The Sea and the Hills: The Life of Hussain Najadi,” what are some of the things you would like them to take with them?
HN: My own story starts in a different era. Life then had been lived as it was by generation upon generation for perhaps a thousand years. This tradition provided society with its rules and ritual, its comfort and stability. From my youngest years onwards, I was to break the mould of that tradition...

AR: As a leader and innovator, you have made history by being the first to revolt against the Arab lifestyle. You were also part of the movement that was instrumental in bringing about the reformation of Arab Society. How does it feel to have made such an impact on society?
HN: We must break the norms, or traditions which keep a society down, no matter where. I feel I am a servant of change, through peaceful non violence methods, humbled much by my study of Mahatma Ghandi and Nelson Mandela. As a student of history myself, I feel obliged to show the path to others, and be a centre of HOPE in this life surrounded by much injustice and misery. Sometimes, a person’s life will make so much impact on the life of others. I want to be that man till I depart this life.

AR: In America, there seems to be some stereotype of Arabs owning Convenient Stores and gas stations. What is your thought on this?
HN: To Arabs, Africans, Latinos, Asians, in America, I say that you can make it like Hussain Najadi and even better, if you just be humble enough to learn from others, from history and perhaps from this book called “The Sea and the Hills”, my life story. Modesty is a great virtue and learning is the path to success and progress in life.
AR: What business advice would you share with struggling entrepreneurs who face obstacles in business?
HN: Work hard, never give up, failures are the ingredients of success of tomorrows, and depend on your own will power, and virtues. Stay on course with your plans, and do not listen much to others. They cannot see what you see in your vision and dream. Borrow less or none if you may, and do not mortgage your future to the greedy bankers.

AR: What words-of-encouragement would you share with individuals who went through similar hardships in life that you went through at an early age?
HN: Same as above, and add that I never accepted defeat as the end of my dreams in my entire life. Failures enrich me and make me stronger to face the challenges in my work and in my plan. Sea and Hills here mean: downs and ups in life. So we must pass that test in life. Tenacity and will power, in whatever you decide to achieve.

AR: Would you like to add anything in closing?
HN: I would like to say a very big thank you for giving me the chance to air my philosophy and my humble views in life. Only through progressive Media like yours, is it possible that I could reach my poor audience. You are helping me to help others. God Bless you all. I am just a servant of change, and thus a servant of you all.