Patrick Faucette of the Have's and the Have Nots 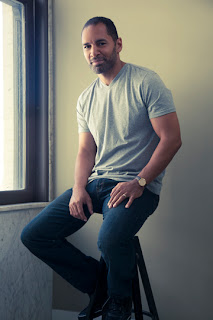 After pursing an acting class while having a career as a Physical Therapist, it was soon that the talented and gifted actor, Patrick Faucette, would take on a love for his new found art, acting. At a young age, Patrick had a passion for playing the bass guitar. When he became an athlete in college music was put to the side; however, it resurfaced later on in his life as an actor. The brilliant actor has been credited for films such as Teenage Bank Heist and Walk Hard, as well as occurring roles in the highest rated drama on OWN, “The Have’s and Have Nots”.
Today Faucette continues to be blessed as his gift and talents opens up doors to his future. Here is what Patrick Faucette had to share during a recent interview with Consciousness Magazine.
Aaron Robinson: How did you land the role in the new sitcom “The Have’s and Have Nots”?
Patrick Faucette: Well, I started as a I kind of last minute audition. On Friday my agent called me and asked me to audition on “The Have’s and Have Nots” that afternoon. So I shoot to my job at that time and pulled up my script and start studying it. I started at 10 in the morning but I had to audition around 3 in the afternoon. I studied my script and went to the audition and they were taping it to send to Atlanta for approval. So, I went to the cast director and did my thing, and later on that day my agent called me and told me I booked my job and that I was flying out on Monday. Monday I flew out to Atlanta and started shooting on “The Have’s and Have Nots.” Originally, it was suppose to be just a one episode deal but it turned into a reoccurring thing.
AR: What is the energy like working on a Tyler Perry sitcom?
PF: Great great energy! The whole cast, everyone is really cool. It’s almost like a big family. No one has any big egos. It’s kind of a happy family.
AR: Did you get any advice or any acting tips from Tyler Perry?
PF: Oh yeah, Tyler Perry is kind of the head of the ship like a captain. Everything from the lighting to the camera angles, to the shoots, he kind of has a hand for that. Even to the acting, he would kind of give you a little tip of what he wants. He is kind of a master of his craft. He knows what the audiences want. So he would direct you accordingly.
AR: You are also an athlete and a musician. Can your fans expect anything from you in the future in regards to any of those two gifts that you have?
PF: Oh yeah, I played football in college and high school and in college I was on a football scholarship. Well, I don’t think that I am going to be playing anymore football. (Laugh) I don’t think my body can handle it. Musician wise, I play the bass guitar. I’ve been playing it since I was a little kid. I did a movie, the movie Walk Hard where I played the bass. I was playing the stand up bass. And that was pretty fun. And I would love to be able to play in a movie where I get to play the bass guitar or the stand up bass again. That was a great experience working with the music supervisor learning all the songs all week and playing on the shooting.
AR: I thought it was interesting that you were once employed as a Physical Therapist after college.  Was acting something you always wanted to do at a younger age or did you decide to get into it at a later point of your life?
PF: Early in my life, I said, ‘I was a musician’. I was more into bands in junior high school, high school, and when I went to college I was more of an athlete. I kind of put my bass down…just played football. After I graduated from college, I moved out to San Francisco with a bunch of friends that went to school with me in Boston and they were kind of in the acting program. So, when I got out to San Francisco I was working Physical Therapy and they were doing plays and acting classes. Then they convinced me to do one of the plays with them and I kind of got hooked and started taking acting classes and I fell in love with the acting classes.
AR: What words of encouragement would you share with individuals who are looking to be successful in the entertainment industry?
PF: I would say in order to keep that passion that you had when you started or whatever got you into acting, the love of acting that you fell in love with, try to keep that passion. It’s a rough load with disappointment here-and-there and you have to keep that fire and that ability to stay in the game until it happens for you. You have to keep the love for it.
AR: Would you like to add anything else before we close the interview?
PF: I really appreciate that Tyler Perry had the confidence in my acting to pull the trigger on making me a bigger character on the show. For him to have the confidence in me and have me be apart of that creative process and to create my new character, that was pretty exciting to be a part of Tyler Perry’s whole creative process.
Photo credit: Corina Marie Howell