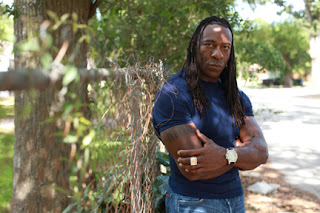 Many may know Booker T Huffman as being a professional wrestler, TV commentator and General Manager of the WWE brand name SmackDown, as well as for the signature phrase “Can you dig it, Sucka!” However, when the cameras are turned off, Booker T is traveling around the country visiting schools, juvenile detention centers and attending youth summits. He takes his time to enlighten and empower the youth about the harsh reality of the street life and the importance of education, sharing his past life story which consisted of poverty, drug use and crime.

Life wasn’t always grand for the Houston, Texas native, who had yet to overcome the harsh reality of life after losing his father at 11 months. After losing his mother as a teenager, he and his siblings were left to be raised by their older brother. Eventually, life took its toll. Booker T was slammed by adversities. Crime followed the ‘future world wrestling star” to his adult hood, landing him in prison for nearly two years.

Before the superstar rose to celebrity status, he had to put his life into perspective, diverting the negatives in his life to a positive. From that point forward, the sky was the limit as Booker T Huffman became king of his destination. He attended the World Wrestling Alliance, later finding success as a professional wrestler. He went on to win numerous championships with TNA, WCW and the WWE, whether solo or with tag team groups. And when one mentions the duo words tag-team, it is likely that the group Harlem Heat, which includes him and his brother Lane ‘Stevie Ray’ Huffman, will come up in a conversation.

I (Consciousness Magazine) was able to catch up with Booker T Huffman as he was on his traveling route to empower the youth. Having a kind and humble spirit, it was as if we had known one another for years. Here is what ‘The Champion of Defeating Adversities’ had to say about his latest endeavors, as well as his role as author of his new autobiography Booker T: From Prison to Promise.

Aaron Robinson: Hello Booker T, I appreciate you for wanting to pursue the interview and reaching out to me.
Booker T: Oh definitely!

Aaron: What was it that came to you when you realized that you had to make a positive difference within yourself?
Booker T: Ah man, just going back to my mother’s wishes for me to just be a good person in life. My mother use to always tell me I was getting into a lot of trouble, that I would go to jail or will end up dead somewhere. I ended up in jail. I realized that it shouldn’t [have taken] being in that cell that I had to change my ways. My son was on the outside and I was always thinking about my mother being a single parent to raise 8 kids. What kind of father, what kind of man would I be if I didn’t raise one. That was wearing on my mind. Right there [I realized that I had] to just come out and change my life, or do something positive.

Aaron: While being incarcerated, did you ever have a vision of foreseeing yourself becoming successful?
Booker T: No no, that was something I had never foreseen. I just wanted to come out and make a better life for myself. Fame was the last thing on my mind. At that time my brother was telling me that he was going to help me get a job, and the job was at an apartment complex. He said ‘whatever, no matter what that job is, do the job to the best of your ability ‘til something else better comes along!’ I just always kept that attitude right there.

Aaron: Booker T, you have an autobiography called Booker T: From Prison to Promise, what inspired you in wanting to share your life story?
Booker T: I use to always say that I was a huge fan of Muhammad Ali. He was like my idol; I mean he couldn’t do no wrong. I use to get into a lot of trouble and my mother couldn’t tell me to do right nor my brothers and sisters, preacher or the pastor; nobody could. I would have said if Muhammad Ali said that exact same thing that everybody else was saying, I would have taken it and I would have run with it. Now, I feel like I’m in that position where other people are looking at me. For many years, a lot of kids, a lot of minority troubled kids, in such troubled areas hear my story and know that I’ve been there. That’s why I reached out to write the book and write it from a raw real perspective, to let the readers know that if Booker T could do it, it’s possible.

Aaron: When speaking to the youth, what advice would you give to them that they could remember for the rest of their life?
Booker T: Watch the news. (Laugh) Know what can happen to you. Like for myself, for aggravated robbery, I didn’t know that charge carries through to 99 years. I didn’t know that with capital murder there was a death penalty charge. I didn’t know that. Simple robbery comes with 5 to 15. I didn’t know that kind of stuff. If you learn it, it would literally divert you of ever wanting to go down that path; I think.

Aaron: You rose to General Manager of SmackDown. How has that experience been for you as oppose to wrestling?
Booker T: I’m embracing my role and my place in a position in professional wrestling these days. As a young man sport, I tend to apply much knowledge as general manager. It’s been very very cool! It’s great actually! I’m totally embracing my position and I hope to have tenure to somewhat like Teddy Long. I’m looking to have a string of that longevity.

Aaron: Do you have any words of encouragement for the up-and-coming wrestlers whose trying to get in the field that you’re in?
Booker T: The best advice I could tell them is make sure that your heart is serious about this business. Make sure your body is right. No one can tell you when you look in the mirror how good you look. You have to be ready when that opportunity comes. The only way you’re going to be ready is when you train properly.

Aaron: What’s next for Booker T Huffman in the future? Can we expect any new exciting things from you?
Booker T: Right now I’m on my way on the plane to Chicago. I’m going to do some motivational speaking and talk to some young kids from the hall rooms in the high school. Then I’m going to another youth summit, then a detention center. I’m trying to save the youth of America and put them on the right track as far as knowing what life is all about. I was talking to a friend of mines. Me and her, we were talking about gang members. Gang members don’t realize though when they are young; that they are 18, they are 21 years…25. The years kept going on, they are still in a gang, they are still banging. Then they wake up. A lot of gang bangers don’t think they are going to live past 30. You know what I mean. They don’t know how to think about life past that. Then they wake up and they are in their forties…they don’t have a strategic plan. See it’s all about, no matter what form of life it is, you have to prepare yourself, be educated on life. Otherwise, life is going to really give you a bad bad headache. That’s the next goal of what Booker T is into, saving. Saving America if I can!

Aaron: That’s great! That’s a wonderful thing! Would you like to add anything else that we didn’t cover or with your fans before we close the interview?
Booker T: I want to send a shout out to my fans; I appreciate the love and respect for so many years. Many fans always say that ‘I appreciate the entertainment that you have given me for so many years.’ That tells a compliment more for a professional wrestler and entertainers. I just want to ask the fans to keep speaking bluntly and [I’m going to] keep doing what I’m doing.

Aaron: Thanks Booker T. This means a lot to me.
Booker T: Appreciate it man. No doubt. And stay up!