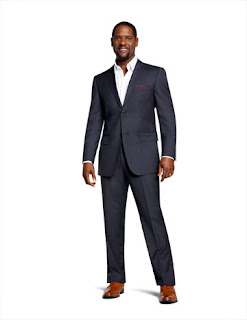 Confident, eloquent and classy are some of the words that describe one of Americas most exceptional actors and directors, Blair Underwood. The veteran actor gives the exclusive on his spring line of the BU Collection, which launched at K&G Fashion Superstore, February 15, 2013, an addition to the BU Collection that launched in 2011.

Having a career of 28 years as an actor, the Golden Globe nominee speaks on what inspired him to create the tailored clothing line. “A lot of roles I play are like white collar character, you know, professional characters, doctors, lawyers and presidents. After a while, I looked up and was like well wait a minute, you don’t have to wear 2000 dollar suits, and you don’t have to pay 2000 dollars plus more for good quality suits. If you can create something that’s still of quality but is affordable and accessible to the masses, then I think that is worth doing,” brilliantly says Underwood who has also been vividly inspired by his mother who is a fashion designer.

Having a successful acting career, the movie star has come a long way from playing Russell Walker in the 1985 movie release Krush Groove to appearing in films such as Woman Thou Art Loosed and TV series such as Thunder and Lightning and The Event. With sincerity and integrity, the accomplished actor brings forth enlightenment to the meaning of his fashion line. “It’s more than just a fabric and thread that are put together in a very classy type of way. BU Collection is all about a lifestyle, an aspiration lifestyle, looking to inspire, [to] feel good about yourself.” He continues to speak, “the executive line that we launched in 2011 had two burgundy flip button holes off the sleeves of all the suits and that represented ‘out of many we are one’. Two of the multiple clips represent ‘many’. The color with the burgundy the same color represented ‘the blood’, which we all share that intimate color. We all have that in common. The same kind of color blood lives through all as a human race.”

Blair describes the expansion of his tailored clothing line as self-reliance, unity and humanity, self-awareness, strength and focus, which are mere qualities of himself. “When we launched the BU Collection 2011, we only had the suits; we had dress suits, ties and cuff links. As of today we’ve broaden and expanded the line to jeans, casual shirts and hats, leather hats and leather shoes,” says the brand spokesperson. The BU Collection is 100% wool suits. They are also available for big and tall men. The average cost is $280 in price and $180 for the blended suites. Also available are apparels and accessories such as sports coats, denim, linen, sweaters, pools, knit tops, and belts.

“When we embarked upon this whole path for 2011, [it was] not just to call it a clothing line for a reason but with a purpose, to purchase with a purpose. We have a lot of affiliations by the way: community partners and corporate partners, so we try to do whatever we can to make sure that we’re giving back on the cloth that we are selling; whether we are giving back to the community or some support service or foundation. There’s a lot of thought that went into launching BU collection 2011,” excitingly he expresses. Over the years, Blair has been involved in numerous charitable organizations, as well as initiatives that has empowered and educated the youth. In 1993, he won the Humanitarian Award for his work with the Muscular Dystrophy Association. His track record of being active for the betterment of mankind runs long, as he continues to give back.

BU Collection is available online at www.kgstores.com. Underwood articulates why he chooses to make the products available online for his valuable customers. “Every Christmas, especially for the holidays, you see more and more every year, people are buying online. That’s what they look forward to. We wanted to make that available. We launched the online store last year and that’s doing incredibly well.”

Being in business, there are always challenges to producing and marketing a product; however, Blair Underwood and his partner Gary Reeves has been successful with their business initiatives. Eloquently, he speaks. “There are always challenges. What I can tell you, there’s been a great working relation with K&G. That’s what I’m excited about, and starting a relationship with my business partner Gary Reeves.” The talented Image Award nominee speaks on the excitement of having his own clothing line and how K&G Fashion Superstores founder George Zimmer played an important role in his vision. “Because of his willingness, it happened. He took a chance on me…there hasn’t been a lot of challenges in that aspect,” self-assuredly says Underwood.