December 05, 2013
Phil “The Gift” Heath is Mr. Olympia with A Purpose
Interviewed by Aaron Robinson 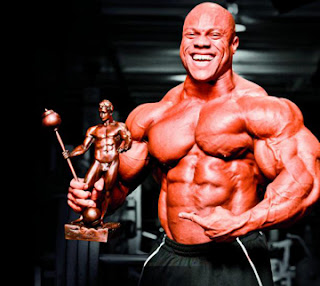 On a busy workout day, Phil “The Gift” Heath takes time out of his busy schedule to speak about his will, determination, drive and support of family and peers during his journey to becoming Mr. Olympia. He also gives insight to his box hit docudrama “Generation Iron”.

Aaron Robinson: What was your inspiration of wanting to become apart of the Olympics?
Phil Heath: My whole goal was to take myself year by year and transform and really just look a lot better with my shirt off. That’s what I started with, next thing you know I was doing amateur shows winning all of them, and then became pro and started winning shows. [I was] not like a Lebron James or Kobe Bryant coming out of nowhere in high school and actually doing big things in the pros. I’d say my 3rd year as pro in 2008 is when I placed 3rd as Mr. Olympia. That’s when I realized this could be really special. In 2011 I was able to win it.

Aaron: Were there any challenges that you endured along your journey?
Phil: There were a few challenges. Number one is the eating. My very first year of body building, I was finishing up my 5th year in college, and to understand that you have to eat every 2 and a half to 3 hours, [which] is very difficult when you’re trying to go to class, work a part time job and then learning what to eat. You really have to become organized. Going to the gym wasn’t as hard, because I was always into playing a sport, but the food was hard. Even ‘till this day, it’s a challenge.

Aaron: You are in a new documentary, “Generation Iron”. How did this film come about?
Phil: It came about after a conversation that I had with Latter Company and also with American Media Inc. They had mentioned that there was a future project kind of going back to the “Pumping Iron” movie and making it a new one. At the time [while] going for my second title, I thought it was a great opportunity to be a part of it. I thought this would be a great way to journal my pursuit to repeat at Mr. Olympia. It was a cool project. It was pretty stressful at times, having the camera with you, massage therapists, chiropractors, etc., but by the second or third day it was like they wasn’t even there. I was happy to be a part of it. A lot of people have received it very well in theatres.

Aaron: You have many celebrity appearances in the film. How does if feel to have that support base?
Phil: It feels great. Just because we compete doesn’t mean that we don’t inspire other people. As you can see a lot of hip hop artists and celebrities are mindful of their health and fitness. Being on tour and doing a lot of appearances, they have to be in good shape. They want to look great, they want to feel good, and they can’t be sick all of the time. It’s great to be acknowledged by those people. To be able to chat with those guys is just incredible.

Aaron: What practices did you pursue differently to out-do your competitors and remain the title holder?
Phil: I was really focusing on making sure I could recover faster than all of them. Every time you read a magazine about someone’s training, they never talk about how they recover from that hard training session. My whole focus was to say…after a hard session, what could allow me to still get out of bed the next day. I researched to see what type of massage therapy I needed and also what other things that I could do. Everything had purpose. I had acupuncture for my spine, electronic stimulation, tissue massage, different trailing and stretch exercises, just everything you could imagine.

Aaron: You are also a father. Being a muscle builder and champion, how has this been for you and your family?
Phil: I think it’s been great, because action speaks louder than words. My core values of having a willingness to learn new things, being hard working, having discipline and perseverance through those tough moments, and seeing things falling through with your dreams and inspirations, I was really able to hammer that home. My family could see that this could be transcended into other areas of life. They realize that my hard work has been rewarded. Our country was built on pride. Kids nowadays don’t really have pride in all of the right areas. I care about my body and I care about the sport, and I’m now able to share my story with other people like you because of it. My family has been very supportive.

Aaron: What advice would you give to those looking to make a career in your line of work?
Phil: I would definitely say pick up the magazines to see if there is anything that interests you. There are different types of body builders. Someone is going to be in there that you may aspire to be like because maybe they look like you or have the same structure or height as you. Do a lot of research. Just research and have a positive attitude, give it a try and don’t worry about anybody else. If somebody tells you that you can’t do it, they don’t know your heart; they don’t know your mind and soul. I tell people all the time you can’t measure a person’s heart. Just go in there with the right attitude and kick some butt in that gym, and get after it every day. Sometimes it’s going to suck; you’re going to have those bad days, but you’re much better off in there than at the bar on happy hour. It’s much more cleansing.

Aaron: Would you like to add anything else before we close?
Phil: I would say that in regards to the movie there are certain parts of it that aren’t as factual, because you have to make it entertaining. The main thing that I want people to gather from this is that each and every one of us poured a lot of energy into this project while we were training for a show.

For me, I am very blessed to be Mr. Olympia and the star of the movie. I hope that more people can do more research about who I am and what I’m about based on that film, and realize that you got to see a glimpse of who I am, but you’ll see much much more through my website and social media. And who knows, maybe they’ll see me at an appearance near them because I travel all over the world. I’m always going to help people and give them a great message of being motivated and kicking some butt in that gym, and feeling better about their health. I’m not here to pass judgment. I’m here writing these articles to help. The biggest message that I want to get across is that I’m Mr. Olympian 3x over and I’m here to help people.