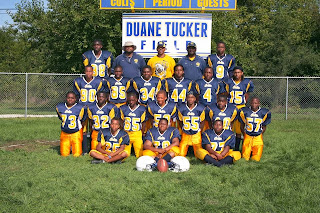 You’d think that any youth football organization would be thrilled to accept a hefty donation. For the Kankakee Colts Football organization, for example, a check for X amount of dollars could go a long way in helping the football and cheer organization grow and reach their goals. In a bizarre and disturbing move, the Kankakee Colts organization rudely rejected a hefty gift from a Publishing Company. As a result of this obnoxious behavior, unfortunately the youth are unknowingly impacted. If the goal of youth sports organizations is to enable the youth to participate in sports and learn some of life’s most important lessons through sports, why would one turn away funds that would help them grow in a fashionable manner?

Happening to be visiting our hometown on the weekend of August 24th 2013 and while scrolling through Facebook, we noticed a fundraiser for one of the local youth football teams was being held this particular weekend. Being a big supporter of our hometown community events, this was a must-attend event for us. Without a doubt we penciled this event in our calendar and were excited to attend the Kankakee Colts Football and Cheer Organization’s Crosstown Classic Celebration.
Upon arrival at the Majestic Theater (Kankakee, IL), we were excitedly anticipating showing support to the Kankakee Colts organization and blessing them with a large donation to help their organization prosper and also a substantial write-up to be featured in a national publication, but to our surprise, we (CEO of Publishing Company and credible journalist) were greeted with rude rejection. Before entering the building, as we approached the theatre’s outside entrance, still standing on the sidewalk, we were first approached by a African American lady who repeatedly told the two of us “$5 per person, $5 per person to get in, it’s $5 to get in!”  This immediately brought concern to my attention because the flier read that donations were accepted for entry. The definition of a donation is ‘an act or instance of presenting something as a gift, grant, or contribution’ (dictionary.com). So why was this individual repeatedly voicing that it was a $5 cover charge to enter??? This couldn’t be so, because donations are not set at a particular amount, they are what ever amount the contributor decides to give, so why is she stressing $5? Unaware of what company we represented or what intentions we had of blessing the organization, the lady continued to get her point across that it was $5 to enter.
We then entered the theatre, walked thru the short hallway to get to the door in which the Kankakee Colts event was being held, and was sure we would be greeted with open arms, appreciatively accepting our gift. Once reaching the event doorway, we introduced ourselves to the gentlemen and lady who was holding a young child in her arms (Kankakee Colts representatives), voiced the company that we represented, the write-up that we were planning to pursue, and showed our excitement for being able to show support to our hometown youth sports organization by giving a immense donation. To our surprise the female and male Colts representatives did not respect our company, nor did they respect us as two human beings. The lady began questioning where we were from in a bolstering and disrespectful manner, and questioned if we had college credentials. Being highly educated and the alumni of two very prestigious universities, sure we have multiple credentials, but our credentials had nothing to do with the fact that we were trying to bless this organization with funds. Before long, the female Colts representative and several other rude individuals approached us and began saying impolite, obnoxious slurs to us for no apparent reason, in a very cruel and aggressive manner.
The unfortunate part is, they were being very vulgar, demanding $5, but little did they know that we were anticipating donating way more than a measly 5 bucks. After sufficing their rude comments and offensive behavior, there was no way that our company would give this large amount of money to an organization ran by discourteous, unappreciative individuals. Instead we decided to donate their intended donation to an organization who definitely has the youth’s best interest and who will greatly appreciate our donation.
Having covered and contributed to hundreds of events from the NBA, NFL, Isiah Thomas’ Humanity Award events, to the Harlem Globetrotters, and the events of many many other significant icons, however, we’ve never encountered such inhumane treatment. Receiving these hideous ill-mannered behaviors from our hometown was a total shock and disappointment. Turning down donations is a bold move, and the question still remains…is the Kankakee Colts organization really for the youth? If so, why would they reject this monetary opportunity?