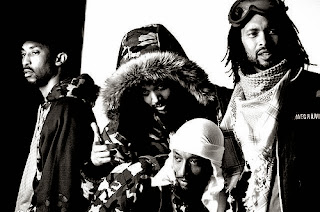 The Souls of Mischief embarked on their international tour in ode and celebration of their 20th Anniversary of their debut ’93 Til Infinity.Group members A-Plus and Phesto nostalgically recall the recording process and all things endured when making such a classic album. They drop knowledge and shared their stories viewed very entertaining.


Hector De La Rosa: How was the classic ’93 Til Infinity album uniquely different from other classic albums that dropped in 1993?
A-Plus: I think it was different because we as a group were coming from the Bay Area when West Coast was at its prime in hip-hop history. It was at a time in the music industry I view as the ‘gold rush.’ Record companies were looking for West Coast hip-hop acts after the success of Dr. Dre and Snoop Doggy Dogg. When one thinks of West Coast one associates it to gangsta rap. It feels very good that we stood out amongst the popularity of gangsta rap and defied the odds.

HD: What was the Souls of Mischief feeling at the time when the group recorded ’93 Til Infinity?
Phesto: At that time, we were all kids. It was a whirlwind experience for all members of the group. The goal for us was to make our mark as a hip-hop group. We wanted to be a part of something monumental and garner recognition for recording great hip-hop albums and have legendary status. Therefore, we wanted to add our own signature to hip-hop without being redundant or recycle what was considered the norm. I think at that time we were hungry. We were aware that people perceived us differently from other West Coast counterparts. Overall, we wanted to prove ourselves that we belonged.

HD: What were your expectations of the album at the time?
A-Plus: Similar to what Phesto mentioned, we wanted to make a dream come true and make the best of it. We were serious about making a very good album that would solidify Souls of Mischief as the group who got next. We wanted to represent where we were from in a good light. We wanted to be in hip-hop history books and achieve some sort of celebrity status amongst all the hip-hop acts and emcees we grew up and admired. We expressed ourselves through hip-hop as a vehicle of expression and for the love of the art form versus today where many rappers rap because of a means of garnering monetary value. Hip-hop at that time was very exclusive. This was the Souls of Mischief’s expectations.
Phesto: I would like to state the fact that Del The Funky Homosapien was the only artist representing our crew before our arrival to the hip-hop scene. He was the one who not only paved the way for us but set a standard as far as having Souls of Mischief raise the bar in artistry. It was a blessing and we wanted to show we were a collective of dope hip-hop artists. We compared ourselves as super heroes wanting to stand out at a time when the market was not so saturated.

HD: How did the Souls of Mischief go by in selecting what songs would make it to the final cut of ’93 Til Infinity?
A-Plus: We did most of the production in house. We recorded the album within nine to twelve days. We were focused, dedicated, and hungry. We took some demos we produced to the labels to draw interest in signing us to a record deal. By the time we got signed, the songs were already recorded. I recall that any record that did not make it on the final cut was because they were too long in length. It was two songs that were removed from the album.
Phesto: It was a tough decision for the songs that did not make it. However, those particular records were eventually released and heard later throughout the years and were well received by the masses. 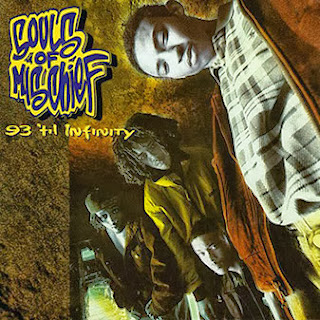 HD: Where did the group name Souls of Mischief derive from?
A-Plus: Basically, we had another name for the group. At the time, the labels were interested in signing us and we were told we needed to change the group’s name because it had an old school appeal. Therefore, we sat around for days thinking of names to call our group. We used to walk around the neighborhood and smoked while walking trying to think of names. It was a no brainer. We thought of The Souls of Mischief and we stuck with the name. I recall our demos and initial contracts had a letter ‘z’ at the end of ‘Souls.’ We ultimately made the choice to take the ‘z’ out at the very last minute. We wanted a name we would not regret looking back and one that embodied the end of our teenage phase. We were known for being mischievous on the microphone and it represented what was going on in our real lives.
Phesto: The name to me means channeling certain energy to do mischievous things. Therefore, we would take that kind of energy to create something constructive and positive.

HD: How much has the music industry changed since the time your released the classic ’93 Til Infinity?
A-Plus: It has changed drastically. When we came out as a group, hip-hop was discovering itself. There was a creative aspect to it before corporations found a niche to make a profit off of it. The major change is that hip-hop is now a global multi-billion dollar industry. It does not have cultural, geographical, and gender boundaries. It is now a part of human culture. Hip-hop derived from the streets in hopes to stop the gang activity and violence in the 1970s by gang members. Now you get the opportunity to see traces of hip-hop on kids’ shows such as Sesame Street.

HD: Which of the songs from the album did you have the most fun recording?
A-Plus: I cannot say it was one particular song that served pleasurable. I think recording that entire album was fun to record. We were teens overjoyed at being in the studio recording. I think the most cherished memory was having our friends and some members of the crew come over to our recording sessions.

HD: Describe where the concept of “Step To My Girl” derived from?
A-Plus: It was something one had to go through in the Bay Area especially if you had a girlfriend or woman that was stepped to by a male counterpart that served as a friend of yours, same time disrespectful because he knew she was already taken. The concept came from a scratch provided by our friend YZ. We used his record for that song. I recall getting the beat and adding more production to it. I would play, sample, and scratch my vinyl collection. That was my method of finding creative and lucrative song ideas. I would listen to hip-hop records that mentioned women. This was how this particular record was birthed.

HD: Describe where the concept of “Make Your Mind Up” derived from?
A-Plus: The beat to this song was produced by Del The Funky Homosapien. He was going to use it for his album. I used to beg him for that beat. The beat to that song was very clever, creative, and soundproof dope. I felt it was meant for me to have. He would not let me have it. He is known to always hold on to stuff. One day, I brought up the conversation of him not using the beat and he ended up giving it to me. I decided to add more production to the song adding a fuse of scratches and resulted into a unique single.

HD: Your definition of Golden Era Hip-Hop?
A-Plus: Phesto and I were just talking about that notion.
Phesto: It is sampled based. Three words that sum it up: jazz, soul, and funk records. These three elements sampled and chopped over hard drums. It has to be lyrically intact and has to have substance. Your music has to have hills and valleys with varying subject matter in the context of a ‘Golden Era’ album ranging from socioeconomic conditions to women. The ‘Golden Era’ was about records and not single driven for a point of sale. People in that era used to listen to full length albums. Everything was recorded on analog. Analog provided the dark grainy texture to hip-hop albums. As supposed to now, you hear too much loudness in one record that sometimes clutter and override the lyrics.
Back then, you also had your graffiti, breakdance, and emcee crews. Today, hip-hop artist do not have crews. They have labels. A crew once came together to rhyme with each other.