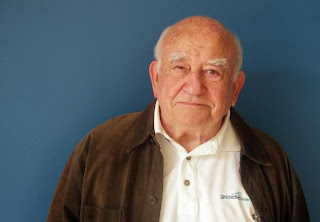 “I’d be very bored with myself if I didn’t get to occasionally do some acting. And I’m not good for anything else; if I’m not good for anything else then they might as well put me in the box,” says the legendary actor Ed Asner during a recent interview with Consciousness Magazine. At the age of 83 and being full of integrity and enthusiasm, the successful actor continues to work and build an impressive everlasting catalog, leaving a significant impression in the film and television industry unlike any other entertainer in history.

Asner is currently touring the country in a one man show called FDR where he plays the 32nd President of the United States, Franklin D. Roosevelt. “I was asked if I’d like to do it as a reading, so I said ‘sure’. It went over okay. I was later told that maybe we can take this out on the road, as a one man show. So I said ‘we’ll try it’. I wanted to see what it was like to do a one man show. So we did that. And it worked. Years later, we’re still doing it,” excited expresses Asner who is also starring on Broadway (where he initially debuted in 1960) in the play Grace, opposite Paul Rudd and Michael Shannon.

Best known for the role as Lou Grant on “The Mary Tyler Moore Show,” Asner earned 5 Emmys and 3 Golden Globe Awards. He went on to receive two more Emmy Awards from his role in Poor Man and Roots. The gifted actor speaks about how the film industry has changed since he has been apart of it. “It changed a great deal. When I first started the studios were the big operators. Now it’s hard to tell who is operating. There is a lot of chaos in the industry. People are still trying to figure out what makes it go.”

During the year of 1996, Asner was inducted into the TV Academy Hall of Fame; he has also served as National President of the Screen Actor Guild and has worked with nearly all of the major movie stars in the film industry, having over 100 TV credits. So, it is evident why he is one of the industry’s most honored actor’s in history. Betty White having a related tenure as such, he mentions their humorous friendship as they recently reunited on the sitcom “Hot in Cleveland.” “She just won’t keep her hands off of me. (Laugh) I might give her a thrill now and then just to keep the old girl going. It’s important that she keeps going. She’s too funny and good.”

Outside of acting, Asner has been an advocate for the charity Autism Speaks as well as advocating for human rights, world peace, environmental preservation and political freedom, and commits himself to the rights of working performance. Nonetheless, he is also a frequent speaker on labor issues. “I was raised as an American. I came to believe in the baloney that they put out as Americans. Unfortunately, I find it that too many people in our power here portray that baloney, but I still believe in it though. Being raised as an American has brought me to that… the American myth ‘you live happily ever after’, explains Asner who voices his views on America while having a kind and caring humanitarian spirit, forever continuing to make a difference in society. He shares his experience about autism. “My oldest son has two sons…the youngest is whom is autistic as well. It has impacted my life greatly, by making me think about others as well as myself. ”

When it comes to giving back, the veteran actor has financially supported progressive organizations such as Democracy for America, Moveon.org, and Progressive Majority and assisted in funding Michael Moore’s first feature documentary, “Roger & Me” in 1989. Some people in life tend to retire in their late 50’s and 60’s and some are blessed to fulfill and succeed some of their goals and dreams; regrettable, many do not. At a vibrant and riveting age, Asner speaks about some of the things he hasn’t accomplished or done yet that he would love to do. “Well I have to win a Tony. I’ve got to win an Oscar. I’ve got to be honored at the Kennedy Center and I just haven’t met the 18 year old girl who is willing to be my wife,” sincerely expresses Asner as he laughs with profuse happiness.

There are many challenges, obstacles and sacrifices made in order to reach a high plateau in the filming industry. The highly respected actor shares some amazing advice and wisdom for those who are looking to have a working tenure and longevity as he has. “[Actors] have a glorious profession. Learning the root of becoming a good actor will prepare you for any other non scientific approach to life or career. It will help you with sales. It will help you with teaching. It helps you in a number of great many places. Learn how to be a good actor or director and use it in the world with whatever cause or course you take. ”

Asner ends our conversation with some more great words of wisdom “I’ll give you the best quote I ever heard. Ben Hecht, a great writer was asked if he liked actors. He said if he were to die and go to heaven and found it populated by actors he would not be unhappy, which means that he loves the company of actors, the conversation and the camaraderie that actors give you. It’s a great society to be apart of.”