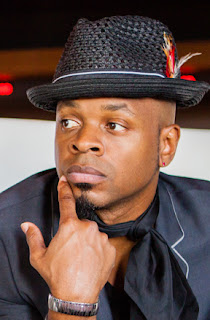 I was recently granted the opportunity to interview Stokley Williams, lead singer of one of the hottest bands of all time, Mint Condition. The Minneapolis multi-platinum R&B group emerged from the 90’s. Their unique and creative sound blended with various genres has left astounding impression on the music industry. They have been known for releasing hit songs such as “Breaking My Heart (Pretty Brown Eyes)”, “Forever In Your Eyes”, and “U Send Me Swingin”, just to name a few.
As of today, Stokley Williams has been writing and producing for Grammy Award-winning artist. Active with the group, they have released their new album, Music @ the Speed of Life. Here is what the gifted and talented well-rounded artist had to share with Consciousness Magazine readers.
Tocarra Eldridge: What makes you guys project, Music @ The Speed of Light different from any other project you all have ever recorded?
Stokley Williams: This project was recorded even more than usual in real time. We really wanted to get this out as soon as the ideas that came to mind were complete. After [we felt] about 15 or so songs were good, we released them. It may have been one of us that were in a relationship at the start of this project, at the end it may have been over or into another one. We wanted the CD to reflect what was happening almost minute to minute. Not for every song, but that was the approach for many of them.
TE: Being in the group Mint Condition, what has been the secret to you guys longevity?
SW: Having a united focus on creating a full album every time from start to finish. Learning to respect each other for whatever level we're at. Having an entertaining live show...paying attention to the business. Having incredible, loyal fans.
TE: What was your experience like working with Wale?
SW: It was a very natural fit. He had a vision of bringing together some folks that he thought would complete that vision. We made that happen with him. The chemistry was just perfect the 1st day we all got together, so we just continued.

TE: As far as the sound of music is concerned, how has the industry changed since you guys first started? Have you guys had to change your sound of music?
SW: Some of the biggest changes have been going from analog to digital, the recording and visual aspect. The internet has changed the rules on pretty much everything. CD's will be obsolete soon, looks like it's into streaming music.
We just pretty much do what we feel. The sound of some of the electric generated stuff has gotten better; we use some of those things. We have always loved to integrate the new with the old, keeps it interesting.

TE: It seems as though less and less pop/R&B groups are in the forefront nowadays, what do you feel has contributed to the lessening of major labels signing groups?
SW: Economic crunches pretty much. That is if you're speaking of a "band" like group, one with acoustic instruments (drums, bass, guitar, etc...), I think some of the cuts in music programs in the schools have contributed. No one is learning instruments, so if you don't see it then you can't be influenced or inspired by it. Labels are in business to make money at the end of the day. They try to be cost effective while working an artist, so the lower the overhead the better for them as far as profit. A label just might be chasing enforced trends and styles and most times there is no substance in that kind of thing. But mostly it's easier and cheaper for a label to sign 1 person than 3 or more.

TE: Do you have any advice for up-and-coming groups or solo acts?
SW: Learn your craft up & down, learn the ever evolving business of music/media, & pay attention to technology.

TE: Would you like to add anything else before we close the interview?
SW: Look out!

TE: Stokley, thank you so much for pursuing this interview with Consciousness Magazine!
For more information on Stokley Williams of Mint Condition please visit http://www.mintconditionmusic.com/