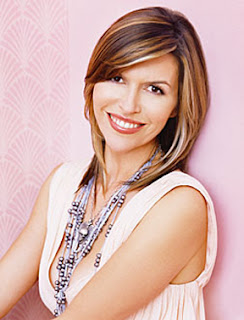 As a regular on the classic ABC soap “General Hospital” playing the character Anna Devane, you can catch Emmy-winning actress Finola Hughes in various films utilizing her creativity to convey her message to her audience. The London-born actress has been acting in TV/film for more than 30 years. She has starred in the epic film Staying Alive opposite John Travolta and has had a critically acclaimed supporting role in the feature Like Crazy with Anton Yelchin and Jennifer Lawrence. The veteran actress has also starred in TV series such as “Jacks Place”, “Blossom” and “Charmed” just to name a few.
Hughes recently directed her feature-film debut, “The Bet” (TheBetMovie.com). The story is about a grandfather making a bet with his grandson, in regards to which one of them will be able to seduce a lady first. The film is a thrilling, funny, poignant and romantic comedy produced by the Community Film Studio Santa Barbara (CFSSB) that premiered at The Dances with Films Festival.
Finola Hughes took some time out of her busy schedule to pursue an interview with Consciousness Magazine. Here is what she had to share with the readers.
Aaron Robinson: You recently directed your first film The Bet. Is directing something you’ve always wanted to explore?
Finola Hughes: Yes, it’s just incredible. I was directing a lot of theater in Santa Barbara where I live. This gentleman who had started the CFSSB was starting this new community film studio. They basically wanted it to be on the same premises as a community theater. Everyone getting together and volunteer and put together a movie, and that’s what we did. They asked me if I was willing to be the first director, and I was thrilled. This community film studio is a really fantastic concept. The idea would be to take this model for a community film studio and start putting together these studios. Basically, just anybody from the community who has any knowledge about making films at all, whether it be camera men, production people, actors…anybody that is interested. They can enroll and as soon as they start their first project, they’ll get a call and you just sign up and get on board. What individuals can do is actually look into their particular community to see what stories are going to be told.
AR:  You play on the Soap Opera General Hospital as Anna Devane. For you, is there a major difference when it comes to acting in a soap opera as oppose to a sitcom or film?
FH: Yes, they’re all very different. I almost feel like a soap is more like a play. Right now, these days we’re shooting about 70 scenes per day, which is 130 plus pages. Most movies only shoot 3 to 6 pages. A night time show will shoot maybe 8 to 10 pages, nowhere near as much as we shoot on a soap. Then a sitcom, you do it sometimes in front of an audience. They’re all different. You’re exercising your instruments no matter what you’re doing.
AR: Some of your first films included films such as The Apple and Staying Alive. What do you believe is the key to your longevity?
FH: I started when I was eleven years old. Oh, I don’t really know what the secret is. (laugh) Perseverance, I guess I would say, and just the need to not be bored. I just love what I do. I create; that’s what I like doing. It doesn’t really matter the type of creating I’m doing as long as it lights a fire in me.

AR: What advice would you give to young up and coming actresses who are anticipating making a career in acting in the film industry?
FH: Ok, this is what I would tell them. Work as hard as you can. Go to a good acting school. Then figure out what you’re going to do when you’re 35, because the game changes. For young actresses, you have to have a second game. Yes, when you’re young, get in there and get your art and perfect your craft. Then think of what you’re going to do with that craft when you’re 35, because it’s all going to change. Either start writing your own projects or start thinking outside the box.
AR: What other organizations are you in support of or are a part of?
FH: I’m a supporter of the Art of Elysium, Child Health, the Wish Foundation and CARE. Those are the ones that I support.
AR: Finola, thank you so much for pursuing this interview with Consciousness magazine.
FH: Thank you!