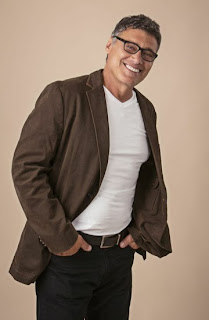 Between the moment of Steven Bauer completing an interview and minutes before pursing the Tom Green Show, I was able to catch veteran actor Steven Bauer as he traveled through the streets of Santa Monica on another busy day. With Bauer being familiar with the publication, Consciousness Magazine, that regularly highlights the positivity of entertainers and much more, I was even more delighted to speak with the charismatic and humble actor. Our exciting and vigor conversation came up about my native city, Chicago, where he spoke of the severe winter days and where he had the opportunity of working on past film projects such as Primal Fear with Richard Gere and Ed Norton and Running Scared, an 80’s film starring Gregory Hines and Billy Crystal. Here is what Steven Bauer had to share with the readers.
Aaron Robinson: You play Avi on the Showtime hit series “Ray Donovan.” What is it like working with such an amazing and talented cast of actors?
Steven Bauer: We have a brilliant cast. That’s one of the things that the people love. [We have] Elliot Gould, a classic American film actor and all these other characters that are fantastic. We’re getting great press on it, you know. To me it’s just a real treat, you do jobs, you do jobs in television and movies but to have an opportunity to work with such a complete quality cast, it’s real great. My hero is Jon Voight. And to work with him is a real pleasure.
Aaron: What makes your character so unique than any other character that you have ever played in film?
Steven: This character Avi is a real tough guy. I’m happy to be a real tough guy. He’s a soldier; he’s a kind of person that doesn’t get emotional about his work. He’s a guy you can rely on and it makes him a really good partner for Ray Donovan. It’s really nice to do a version, my version of a guy, a real tough guy.
Aaron: You have a leading role in Chavez Cage of Glory alongside Danny Trejo that’s coming to theaters in September. Would you like to tell us a little about that?
Steven: Chavez is a really good movie. Danny Trejo plays a really good filming; it’s a real urban movie about a MMA fighter. It has a Rocky kind of story line about a fighter who doesn’t want to compromise, who doesn’t want to sellout, but he has an opportunity to do a big fight. It’s a movie that’s going to go over very well. It’s going to get a nice critique in theaters around the country. I play a really cool role; I play the role of the priest, the brother of the main character of the fighter.
Aaron: You played in one of the greatest gangster films of all times, Scarface, alongside Al Pacino. What is it like to still receive recognition from fans or viewers for the role of Manny Ribera after 30 years?
Steven: It’s nice. It’s great, I tell you. That’s really one of the great moments of my life. I’m happy to deal with it because it has everything in that movie, being able to reach a lot of different generations. The movie and my character Manny; it’s always a favorite movie. I like it. I’m really happy to be associated with that movie. For years it wasn’t that way, but it turned out to be a happy ending.
Aaron: Many youth or adults have a difficult time differentiating reality from entertainment and sometimes portray the violent lifestyle of movie characters. What advice would you share with individuals who glorify the gangster or drug kingpin lifestyle?
Steven: You know, I have really strong feelings about that. The thing is, films are not reality. They try to duplicate reality in films. I know Scarface shrugged a lot of people down the wrong path because they try to go for the goal and go for the big money; they go down the wrong path. There are a lot of cats who try to become the Tony Montana, instead, they end up falling on their face. I will say the kids need stronger role models. Not movie role models, a life and career of people who does hard work are the best role models. I will always try to veer young people away from these wild characters in the movies.
Aaron: Would you like to add anything else before we close the interview?
Steven: Try to stay really clear on the difference between real life and movie life. That’s the important thing; hard work is really the satisfying thing, hard work and family is the strongest thing. Stay away from crime and thug life and all that stuff, that’s all just a cloud of smoke. I think the best way to go is distinguishing yourself and being the best you can be.