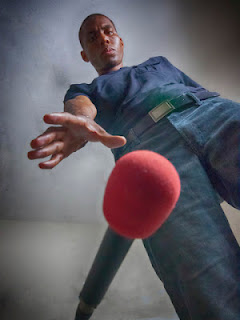 Radio broadcasting has been a tool for many decades to reach an immense amount of people. It can be effective due to the messages delivered by the radio personality or guests who express his or her views and opinions. Expressing opinions is what radio talk show host, political commentator and bestselling author Robert “Rob” Redding does well with confidence and ease, as his mission is to get one’s state of mind out of the matrix.
In Rob’s early years in radio, he was a hip-hop radio personality while attending McNeese State University during the middle 1990’s. He ventured into talk radio and worked as a journalist for several newspaper publications. His experience includes working at CBS Radio WAOK-AM, and later becoming once the only Black director for KMLB-AM. Today, listeners are able to hear him on his radio show, Redding News Review (www.reddingnewsreview.com), which is heard in markets such as Cleveland, Charlotte and New Orleans, just to name a few.
In a recent interview with Consciousness Magazine, Rob Redding gave his respected thoughts on creating a syndicated platform in order to have a voice in the public. Nonetheless, obstacles are still revolving. He speaks about his prior involvement with Sirus XM before his show was cancelled. “It took me years to get there. I had been working literally since 2000 before the towers came down to get on Sirius XM. And I tried everything that I could do at the time to get an opportunity there,” clearly expresses Redding.
The award-winning syndicated radio show host, who is known as America’s Independent Voice, speaks about his challenges and the opportunity he created in the broadcasting field. “Before I got that opportunity, I branched off and did a lot of other things before I was able to finally get that opportunity to do what I did on Sirius XM. I syndicated that has continued other shows as well….my show and two other shows, it’s been a long process. I want to stress that it [was] a challenge. It’s been a real undertaking!”
Read Rob Redding full interview at http://www.consciousnessmagazine.com/Subscription.html