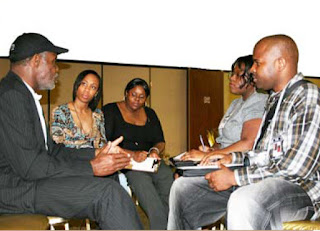 All across the world fans may recognize Danny Glover for his long acting career in films such as Places in the Heart, Silverado, The Color Purple, the Cookout and his most notable acting role as the Los Angeles police detective Roger Muztagh in Lethal Weapon. Emmy Award winner, Danny Lebern Glover, established a reputation as an outspoken humanitarian, having a long history as an activist. Still committed to his progressive causes since his early college days while working as a San Francisco city government bureaucrat, Danny has ventured in to other endeavors such as supporting Tahitian Noni Juice (an herbal health drink).
With the help of Mr. Sennix T. Sams (Danny Glover's Colleague and Independent Product Consultant) and Virgol Hawkins (AON CCAD), Consciousness Magazine had the opportunity to have a sit-down interview with the talented and respected actor, Danny Glover as he and his colleagues came to the Kankakee, IL community to share Tahitian Noni Juice with the people.
While organizing our media circle, Mr. Glover took out the time to have a 10 minute interview with us before his presentation. Prior, he had come into the building and introduced himself to us kindly and waited patiently before taking his phone call. As we prepared to give him space, I began to thank him personally for the interview. It looked as if we were in conversation. My media team tried to get my attention to let me know that he was still on the phone. Mr. Glover looked at me and smiled, tapping me lightly on the leg to make me aware that he was still on a phone call. His earpiece was unnoticeable at the time. When the phone call was over, he was very excited about the interview and engaged in all of us, as if we were all of his children. The videographer began to roll the camera as my writers began to write and start our interview session; beginning with asking him how has Tahitian Noni Juice made an impact on his life?
"Well from when I first started drinking the juice, it had an immediate impact on my energy and so much more. I need any boost I can get. I've always been conscious about my health. I try to do the best…I use Noniproducts shampoo, SPF30 body lotion, hand lotion, conditioner, and oils. My grandson loves their chews! For me, Noni has been a real part of my life. I make sure I have Noni with me at all times."
I have recently heard of Noni Juice and began to think of how wonderful of a product this may be, especially coming from a man of his caliber. I was curious of how much he drank a day. He continued to speak on.
"I drink an average of 6 oz a day, 2 in the morning, 2 in the afternoon, and 2 in the evening. All those are ways in which Noni impacted my life. I think with a product like Noni…with that in mind, a lot of the core concepts when I talk about communities and people coming together, comes from a great deal of the work that's core done. Noni has a so much deeper meaning in terms of health, relationships with people and family as we have done…having the opportunity to come to this community."
When I first met Mr. Glover, I was expecting an entire entourage around him, but it was the total opposite. He came into the building by himself, seeming to be very cheerful about life. From this experience, along with seeing interviews of him on television, I knew that he was really down to earth and much wiser with age. His persona, suit attire and the way he came into the building (standing a little over 6 feet), you would have thought that he was just a typical everyday guy. Conversing with him was very impressive as I asked him, how do you stay grounded and humble as an individual?
"I come from a basic family of working class people who worked very hard and also had solid values. I was born 62 years ago…so my first image is that of people marching and making changes in the country. So there are no excuses! I try to understand the world and advocate for education. This embodied my consciousness in life. The best thing available to us is what you imagine and believe," Mr. Glover articulated excitedly.
Wow! I couldn't believe that we were sitting with one of the most prolific individuals in the entertainment industry, sharing some of the same views and values. I noticed how sincere he was and thought back to some of the protests he's involved with. I was recently involved in a social and economic protest in Chicago. This was my chance to get Mr. Glover's thoughts regarding the protests of the African-American people, inquiring if it has weakened during the last decades.
"It's hard to say. African Americans exist in isolation. I can't make that position that we have weakened in that sense. However, it's not quite like the platforms that we engaged in during the civil rights movement," seriously he uttered. He began to talk about us as an entire race. "It's important for where we are right now in life. We have one planet, the earth, and we are the ones who are by-products. In 75 years, we've done so much damage to the planet, for example, with the exposure to fossil fuels."
Danny Glover's fans and CM readers began to crowd us as we tried to safeguard the visibility of the camera. Our media circle began to become distracted with fans wanting to take pictures and wanting to know why he was spending so much time with us. As they quietly crept in to take pictures, Mr. Glover sat, smiled and took pictures with his fans. However, he continued to engage in and remain intrigued in our conversation.
Read Danny Glover interview at http://consciousnessmagazine.com/DannyGlover.html