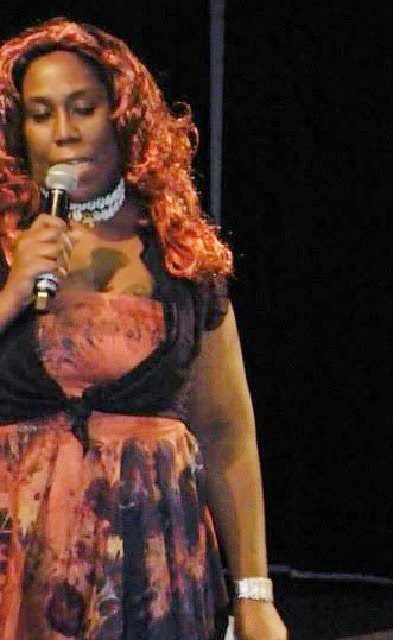 When I visited the set of ‘1Love1House’ and sat in the audience during the show, I couldn’t believe the extraordinary amount of love and peace ambient in the air. Meeting the incredibly humble cast was a breath of fresh air, as everyone was extremely pleasant and connected, one great big family filled with purpose. And that purpose was love.
1Love1House TV is a show that provides a platform for independent recording artists, filmmakers, small businesses and much more.
I was granted the opportunity to interview April “DiscoGoddess” Whitaker, host of this amazing show. She spoke about her creation of the show and gave some great advice and inspiration for individuals who are looking to work in the film industry. Here is what the “DiscoGoddess” had to share.
Tocarra Eldridge: When did you realize film was something you wanted to do?
April Whitaker: It started because I was trying to make a positive impact and change the value system of all the young people here in my backyard by counseling and [doing] community outreach. I was working for the Chicago Public School system, and it wasn’t giving me enough feedback; they don’t treat you well when you’re trying to make a difference with children. They give you a lot of bureaucracy and extra steps just to get things done. I know that every culture relates to music so I decided to start a show and use that [music] to communicate with them.


Tocarra: What was your motivation behind creating the show 1Love1House TV and giving it that title?
April: Well, I call it that because I’m into house music. When the show ends, that’s like a sign off – it’s like ‘alright 1Love1House’, and that’s like saying goodbye. This may sound corny (laughs), but I wanted to create a platform where everyone was a family - where we have One Love bringing the music together.

Tocarra: I think you have been very successful in creating that platform, particularly where up-and-coming artists can showcase there talents. When I attended the taping of your show it was really really great to see the performers utilize the outlet in which you provide.
April: Thank you!

Tocarra: You have created a platform for up-and-coming and aspiring artist to showcase their talents. What is your reason for embracing these talents?
April: I’ve always heard that Chicago does not support each other. It’s been known for several years that we have a reputation of not reaching back and supporting each other. I wanted to just tell the world that everyone doesn’t think the same way. It’s some really good people everywhere, but there’s also some really good people here [Chicago] that are willing to support each other and network. So, when I reach out to people, I just reach out to everybody who has some good material.

Tocarra: On your show you have a DJ who plays house music. Why was this genre of music incorporated throughout various segments of your show as oppose to other genres of music?
April: I’m so glad you noticed that! OMG! That says a lot for me. Thank you! I’ve been into house music forever. I’m old (laughs) and dancing kind of hurts (laughs). I want to make sure young people hear the music so they can take my place on the dance floor. We gotta keep this going.

Tocarra: For those individuals who are looking to operate and host their own show, what advice would you share with them in hopes of them being successful with their endeavors?
April: Mainly creating a team of people to work with you, because you can’t do it all alone. It’s very stressful; you have to wear many hats. It’s a lot of responsibility. When developing a team you’re going to go thru a lot of changes, because some people may not have the passion or the drive or the work ethic that you have – so you have to replace them. Do not be afraid to reach out to people that you’ve never met, especially thru different social media websites. You never know who has the extra time or the talent that they can bring to whatever project you have going.

Tocarra: Do you have any up-and-coming projects that your viewers and fans can expect from you in the future?
April: Yes, I am working with producers in Memphis, TN. One particular guy has stepped up to the challenge. He is creating another addition to ‘1Love1House’. He is calling it ‘1Love 1House We Up Next’. He is going to air my shows and I’m going to air his shows. He is on a big network too. It’s called SVP TV. So, look out for that! I want to start this in different cities. I want to get on a major network and I have to have a bigger buzz. After I extend the show to other cities I will have a bigger audience and then maybe have a better opportunity to pitch it, because I really want it to be on a nationwide network.

Tocarra: April, would you like to add anything in closing before we close the interview?
April: I love Consciousness Magazine and I am so honored to speak with you. I appreciate you taking the time to interview me and get to know what my mission is. I also want to let people know, the DJ that you saw, I may have guest DJs, but I have one DJ named Lonnie B. Soul. He is my main DJ. When I mentioned earlier about having a team that has your vision, I have to tell you, he [Lonnie B. Soul] drives all the way from Waukegan, IL to Chicago when I have rehearsals and filming. You don’t get that much dedication out of people. And he’s good! He’s real good! He gets the crowd rocking (laughs). He’s like the hype man in the studio! (Laughs)

Tocarra: Yes, that is definitely dedication and a rarity these days! Thank you so much for your time April. It’s been a pleasure speaking with you.