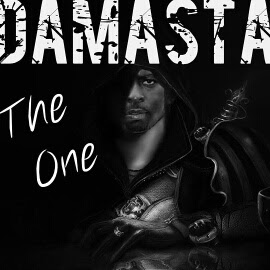 Releasing several solo albums over the course of his career, such as The Curse of the 7, NDA Darkness and HATRED: Lyrical Therapy, DaMasta is back with his fourth solo album The One. The lyrical genius is known for his high energy deliverance spitting dope lyrics keeping his fans and listeners entertained. “The One is more uplifting, a lot of the subject matter that I was on at the time was trying to help people get through some things. I write a lot out of emotions sometimes, so I picked things here and there that might have been going on at the time and things that were going on in the past.” DaMasta illustrates this extremely well in “Harbor Street Blues”, where he reminisces about his childhood neighborhood hip hop era where he got his start as an emcee. His lyrics expresses that real hip hop nowadays has been lost. He cites: It’s been a long time/since the people has heard a strong rhyme/ since the radio has played a true hip hop song/ the game is all wrong/ so bring me home. In essence, true hip hop heads are craving for good music, so it’s up to him to continue to release great music.
In a competitive industry that is forever evolving, DaMasta continues to stay true to himself by creating timeless music. “I never try to sound like anything. My music is always going to sound original because I’m not trying to sound like anyone else. I know what I’m trying to hear and then I try to get that sound. I can listen to an artist and be influenced by that person while I’m writing, but it’s never going to sound like that. You shouldn’t know when something is done, if it’s timeless music.”
DaMasta is known for his angry, witty and clever style. He brings out a side out of him that makes the album a soon to be classic as he demonstrates his creativity in songs such as “That Jam”, “Church”, Nitty Gritty”, “Hold On”, & “Dark Clouds”. The album also features artist such as Unkahmn, Frankie Fontagne, DJ 2183, and Piggy Banks, just to name several.
The One is a must listen to and definitely a must add to your playlist. Once again, DaMasta proves this by continuing to earn his stripes as being a dope emcee by keeping hip hop lovers satisfied, and ultimately keeping real hip hop alive. “They say you got this sound and this sound and it’s popping for 2 years and this sound is popping for 2 years. But when its real hip hop, it pops for 20 years, it’s popping for 30 years. My music is never caught into that sound period. [The One], it’s music that you are going to like today and it will still be relevant 10 to 15 years down the road.”