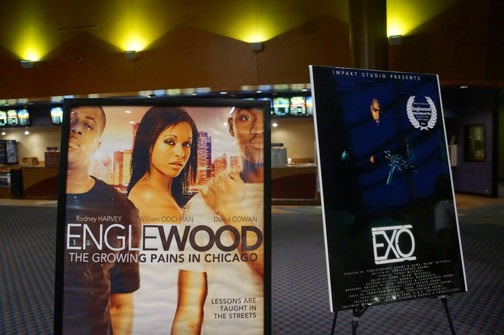 Laughter, cheering, applauding, and lots of love filled the atmosphere of the October 2014 Chicago Englewood International Film Festival (EIFF) event. Celebrating its fourth year, the EIFF rejoices not only on the recent success of Black Hollywood blockbusters breaking huge box office records and garnering big Oscar Award wins, but also on the success of Founder of EIFF Mark Harris’ film Black Coffee which premiered on BET (Black Entertainment Television). This year’s film festival had uniqueness, distinct from rival film festivals of the year. Its displayed workshops and films centered on the concept and theme of “I Believe.”

The newest addition to the EIFF is ‘Career Day.’ Professionals of the entertainment industry including filmmakers, actors, to make up artists gave back to the Englewood community by going to the schools to speak to the youth on possible career opportunities, believing in building future potential leaders of entertainment. The workshops and panel discussions were of great value to those upcoming filmmakers, cinematographers, and sound engineers. These workshops gave plenty of suggestions, shared experiences, and advice believing that with the given expertise it would help upcoming filmmakers and producers to not only further enhance their craftsmanship but produce more quality urban content to the masses.

The bulk of entertainment at the Englewood International Film Festival derived from much of its urban films, documentaries, and shorts. The electric film Englewood pays homage to the residing Chicago community. However, the documentary Vanishing Pearls is the shocking eye opener that marks the soul with soreness of bruised hurt. It emotionally captures an African American fishing community in Pointe a la Hache, Louisiana affected by environmental issues and Mother Nature devastation, leaving the people within the community to fight for justice, claim what is truly theirs while having faith and believe in having better days.

The mysterious and gripping short film The Painter leaves murals on all graves stones of our young dearly departed as tributes. It slickly captures a young man who uses art as a way to escape the social ills of his surroundings including gun violence meanwhile covers the walls of his home with newspapers that journals everyday crime and deaths. The Falls, the stage play turned into a dramatic and comedic episodic, chronicles the life of a haggard family who owns a motel on the breach of losing the property on the Westside of Chicago. The short and the episodic visually and stunningly capture the underlying message of belief through the actors/actresses actions.

The short film Quickee Loob has light hearted content serving as a comedy giving a behind the scenes of an oil-change shop. In a short time, the mini film perfectly displayed each character’s belief in making their dreams into reality while improving their lives for the betterment. Semi-graphic content was expected in Sex Ain't Love. However, the film proved wrong as it is perceived as a tasteful romantic comedy of one night stands and developing strong bonds with the belief that sex is not everything in a relationship.

Bad Apple, the EIFF’s film for its closing night, showcases actor Darrin Henson as a loving husband, father, and head of church going through the trials of marriage and family with its underlying message of believing in rekindling relationships and families, a value that is hardly existent in today’s society and one that lacks in film and television often replaced by the circus of reality shows brainwashing viewers.

The Englewood International Film Festival 2014 is one impactful event that is persistent in providing quality entertainment to the masses with its unique theme deemed intelligent. ‘I Believe’ this film festival was artistically fun and very professional. It would be a delight to see next year’s film festival theme to be one of hope with a ‘Leap Of Faith!’