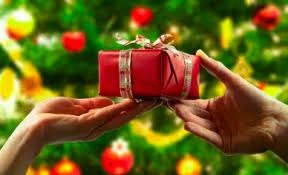 Happy Saturday and on this day, I bring thee good tidings.
Does the latter of my upcoming Yuletide greeting sound familiar to you?  In some ways, it should.  Christmas comes but once a year yet it’s coming around the bend in less than four weeks (as of this writing).  Most of us look forward to being with friends, family and a good time.  There are Christmas brunches or dinners to prepare for and holiday presents to buy and wrap.  Cards will send out to others, most of whom we usually don’t communicate with even though we have enough technology to shake a stick at—with Facebook, LinkedIn, Twitter, etc.
All of the following sounds like a lot of fun.  If you’re with a great family, have friends who like you for you and a rewarding job, it makes holidays like Thanksgiving and Christmas worthwhile.  But it’s not always about spending money and getting that gift you’ve coveted for the past eleven months or so.  Read on; this is getting interesting, people!
People have noticed throughout the years how they’ve seen others perceive the holidays.  A few tend to buy holiday presents to buy another person’s love.  Those unfortunate few may also buy ones without putting any thought into it as in for a Gift Exchange at work or church.  They may also get a “white elephant” for someone else.  A white elephant, by the way, is a present that you either buy cheaply or a present someone else got you, not a snow-colored pachyderm.  Remember that line about Jerry Seinfeld accusing a friend of his about being a “re-gifter”!  It’s true unless you’ve put some thought into a present you get for somebody.
But outside of holiday cards, presents and activities, there is something important worth mentioning.  You can treat every day like it is December 25th.  And for the most part, it doesn’t involve money or a credit card.  That’s amazing to hear but, no, it’s true!
Yes, folks—it’s true!  Let me repeat it: You do NOT have to break the bank in order to have a happy holiday every day.  You don’t need to worry about doing something of a high magnitude as in getting or receiving the biggest present.  Some things are not meant to come in boxes, wrapped in paper with a large bow on top.  There are other things out there for us.
You might be saying to yourself: Like what?  Well, how about starting with something small and/or something nice?  One example could be coming into work on your day off or staying late to finish up that big project that’s due next Monday morning at nine.  Another instance is holding the door for someone who’s in a hurry.  This theory does tend to hold true, especially when one needs to take the lift up to 58th floor and it’s a pain to wait for the next car!  And that little compliment to somebody may go a long way, too.
But remember that old saying: “Don’t say it if you don’t mean it!”  In other words, being nice and giving a compliment has to be sincere.  It has to sound natural and come from the heart.  Doing nice things for others has to be learned so it can become a good habit.  Just remember that giving compliments and doing small acts of kindness is a two-way street.  Don’t worry if someone says or does something nice for you, since we’re all in the same boat.
It’s similar to rehearsing for a play.  The actors need to memorize lines, as well as learn timing and movement, in order for the show to look natural to the audience.  Sometimes, in the real world, one may accidentally “flub their lines”.  That’s okay as long as one owns up and doesn’t pay for the same mistake twice.
There is somebody out there who heeded those words even though he lived over 250 years ago.  Benjamin Franklin was a jack-of-all-trades ranging in interests from community issues and politics to his writings and inventions.  He is considered to be one of the members from the Age of the American Enlightenment (from the 18th century to the early 19th century).  Yet with all of his accomplishments, this humble statesman considered himself first to be a “printer” (Franklin and Hugh Meredith purchased The Pennsylvania Gazette in 1729, which he owned of for the rest of his life; the Gazette ceased its run in 1800.)
Benjamin Franklin invented bifocals, the lightning rod and the Franklin stove.  He conducted his famous kite experiment in 1752, proving—with a key—that lightning is electricity.  Franklin helped to establish hospitals, libraries, fire departments and the post office.  He served as the first United States Postmaster General (his son-in-law Richard Bache succeeded him) as well as an Ambassador to Sweden and France.  Franklin signed the Declaration of Independence and was a delegate for the 1787 Continental Congress.  He also rediscovered an Ancient Greek philosophy we know all too well—Pay it forward, where people pass on kindness from one to another.
Franklin also left behind his writings.  The Boston native began writing an advice column when he was an apprentice for his older brother James’s newspaper The New-England Courant.  Since the brothers did not get along, Ben slipped his column under the Courant’s door and signed with the pseudonym “Mrs. Silence Do-good”.  Eventually, after leaving for Philadelphia, PA, Ben Franklin became known for his Autobiography and, due to its numerous quotes, calendar and other remnants of its day, Poor Richard’s Almanac.  Well-known quotes of Franklin’s include: “Those things that hurt—instruct” and “Thirst after desert—not reward”.  This final quote concludes from his Thirteen Virtues—which includes temperance, order and humility.  I thought it was best to conclude my editorial with it as well:
“…SO SHALT THOU LIVE JOLLILY; FOR A GOOD CONSCIENCE IS A CONTINUAL CHRISTMAS.  ADIEU!”
--BENJAMIN FRANKLIN (1706-1790), Poor Richard’s Almanac


AUTHOR’S NOTE
Happy Holidays!  I wish you all the best of luck to you in your job search and for the other happiness waiting around the corner for you.  Take some time to enjoy yourself during these trying times.  Make sure though to pay it forward once you’ve achieved your bliss and good fortune.  Also, remember that Consciousness Magazine and I don’t take any responsibility for anything written in this article.  Have a safe and prosperous holiday season and an even better 2015!