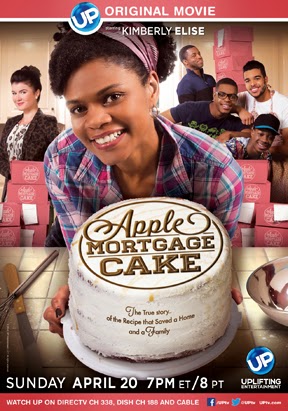 “It was pretty nice playing a real-life character. I enjoyed it. It was nice because Angela Logan was there with us as part of the film since the film was based on her. She’s such a positive and inspirational strong woman. It was an honor to play her,” says Kimberly Elise as she explains to Consciousness Magazine regarding playing the real-life role of Angela Logan in “Apple Mortgage Cake” on the UP Television Network. The Up Television Network provides uplifting entertainment as well as high-quality, diverse, family-friendly programming: movies, theatricals, dramas, comedy series, musicals and holiday specials.

“Apple Mortgage Cake” is a true story based on Angela Logan, a Teaneck, New Jersey resident who was faced with foreclosure. She set out a goal to bake 100 cakes within a 10 day period to generate 4000 dollars to save her home. “Well, I thought it was really interesting - how relative the story was to what was going on with some people in our country. And here is a woman who is facing a very difficult situation and came up with a solution. It’s inspiring!” expresses Elise, the four-time NAACP Image Award winner as she continues to speak about playing an inspiring role as Angela Logan, who is also a single working mother, juggling various jobs to raise her three teenage boys. 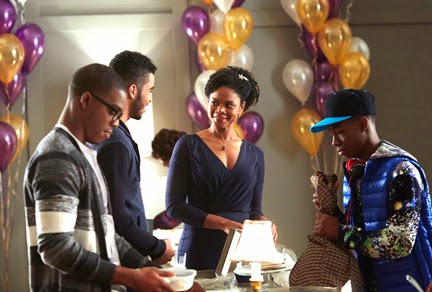 The cast of “Apple Mortgage Cake” consisted of a talented cast including Kevin Hanchard, Lamar Johnson, Stephan James, A.J. Saudin and Gabrielle Miller, just to name several. The film was filmed in Canada, directed by Michael Scott and the script was written by Jamie Pachino. “The cast was great. It was an honor to have worked with some really nice people. We had a good time. It was fun to have three sons in this movie,” states the star of the film. Some of Elise’s other works include “Diary of a Mad Black Woman,” “John Q”, “For Colored Girls” and an everlasting multitude of memorable films. Elise also has a role in the television series Hit the Floor as Sloane Hayes, in which season two premiered May 26th on Vh1. “For all of the fans it’s going to be an amazing season,” excited says Elise who also recently played in “A Day Late and a Dollar Short” alongside Whoopi Goldberg and Ving Rhames.
When it comes to giving back to the community and youth, Elise has supported numerous foundations and organizations whose mission provides uplifting and empowering the community. To date, she is looking to make a powerful ongoing and everlasting difference in many more young women lives. “I have a foundation that I’m developing for young women that helps with self-esteem, self-worth and empowerment,” happily says Elsie.
Elise shares some advice and words of encouragement with aspiring actresses or women who are looking to be successful in the entertainment industry. “You do it for the love and you do it for the craft. Do your training. I did mines on stage. There’s no one route; there is no one way. Just follow your own inner compass and do what’s true to you and what really inspires you. ‘Being you’, that’s the most powerful thing you have when you walk into a room is ‘being you.’”
For more information about Kimberly Elise please follow her on Twitter @ikimberlyElise and on www.facebook.com/kimberlyelise. Visit her website at www.kimberlyelise.com. Also, visit the UP Television Network at www.uptv.com.