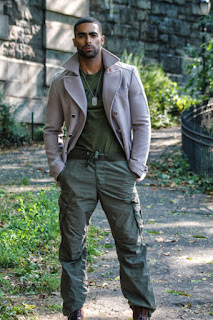 Born and raised in Harlem, New York City, rising supermodel Royce Barrera is soon to be the next face of the modeling industry as he outworks his counterparts in a competitive field. Royce has participated in many leading fashion and art events such as Fashion Africana by Mario Epanya, coordinated by Darnell McLaurin, as well as appeared on many fashion televised shows.

As good as it sounds, the model industry hasn’t always been peaches and cream for the Puerto Rican and Cuban descendant, who has been faced with past diversions. “I never wanted to be a model. My goal was to be a professional baseball player. I was actually a pretty good pitcher. But my career ended after I broke my arm,” exclaims Royce. When Royce overcame adversities in his life, a new door opened as he ventured into his days of modeling. “One day, this photographer by the name of Dorothy Sheek discovered me and said I got what it takes as a model. That was ten years ago. I said let me see what this can do and see where this life takes me.”

Royce continues to speak about the opposition that he dealt with during the beginning of his modeling career. “It was off and on; I took time off, and I started jobs and started working. I never pursued it 100 percent. In the last two years I started giving it 100 percent. I’m just trying to be successful in this field. Right now everything is happening.”

The nature of the modeling industry can be challenging at times, nonetheless competitive as many models compete for the same positions. Confident in self, Royce shares one of the difficulties of the modeling industry. “Trying to make a name for yourself, that’s the hard part! It’s a competitive world. I look at it like a sport. I call it a sport, so I know that it is. I’m a competitive dude, you know. Baseball, basketball, whatever you are competing in, you’re competing against others to really be successful in this field…with your friend models and stuff like that. At the end of the day you’re still trying to be better than them when it comes to poses and taking pictures,” explains Royce. Filled with excitement, Royce accents one of his greatest features and the reality of the modeling world. “What people tell me about modeling, [is that] I have an international look. Here in New York City, it’s a little hard out here. You have to really have a name that’s going to work with you. Also, I’m continuing to learn about myself as I grow.”

Royce gives prominent advice for aspiring models. “Just be real with yourself. Don’t let the no’s put you down. Use those negativities to make you stronger as a person and learn from that. You’re going to cast and you’re going to get a lot of no’s, but you’re going to get that one yes. It put me down at one point. That’s what made me give up at the beginning. I was like you know what, this is not for me! Now I’m hearing the yes and that’s what makes me feel good about myself and that’s what’s really pushing me.” Overflowing with so much ambition and drive, he briefly speaks about his ultimate goal. “The goal is to influence people and kids. You know, you can do it! You just have to give 100 percent of your time.”

As our intriguing conversation comes to an end, Royce ends the interview in style with one of his favorite catch phrases, “Stay Sexy!”