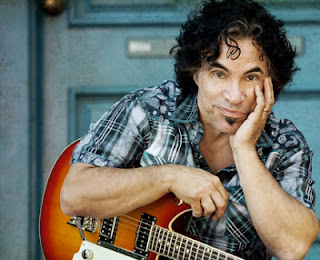 For over 4 decades singer, writer and musician John Oates has entertained the world with amazing and wonderful music; whether solo or with rock and soul duo (Hall and Oates). Within the last several years John Oates has released albums such as 1000 Miles of Life, Mississippi Mile and The Bluesville Session, just to name a few. John Oats continues to make history while leading in the industry as a trendsetter, creating and releasing good music with his yearlong musical project Good Road To Follow where he will release a single-a-month. Oates wrote or co-wrote all of the songs off the PS Records/Elektra Records project. Almost every song is done with a different producer.

I had the opportunity to speak to the legend as he shared some insight about his uniquely and exciting project. “This world has accelerated and people attention spans are in competition with all the things that are out there in the media; whether its online, print, films, sports, TV, radio…what have you. It’s so much increased that I don’t think people have the time to listen to an entire album worth of music. I think that people has been very accustomed to creating their own personal playlist and being in charge of the music that they listen to in a much more personal way. I think iTunes and the digital leading systems have kind of pushed everyone in that direction. I thought, well, why fight them why you can join them, [that] kind of thing. I just thought let me give peoples singles if you like them they can add it to their list, if they don’t like them, next month there will be another one.” Oates continues to speak about his motivation of releasing a single a month. “I think it’s a much more flexible modern way of releasing music. And also as an artist, it gives me flexibility that I didn’t have before when I was making an album. Now, I no longer have to think of music as being part of one piece. I don’t have to think of it in terms of its all in the same style. You know, when you making an album its considerations you have to think about. Now since I’m releasing singles, it s give me the incredible freedom to explore all the kind of music that I like.”

With his latest project GRTF, Oates was able to collaborate with some of the music industry greats, from songwriters to producers. “I got to work with a lot of people on this new project Good Road To Follow that I’ve never worked with and that I really wanted to work with. There are so many people” contentedly states who first singe “High Maintenance” was a collaboration with rising pop superstars Hot Chelle Rae. Oates has also worked with Ryan Tedder of OneRepublic, Nathan Chapman and Kevin Griffin, just to name a few. Oates

Oates was able to explore the freedom of all genres while touching up on all the music that he likes, plays and listen to from rootsy blues, Philly Soul, experimental Americana, R&B, blues, contemporary pop/rock and country. Having an amazing tenure as an artist Oates states what keeps him revitalized when it comes to writing, recording and performing “I will say that if you’re born to be a musician and that’s what’s your passion is, your life and your career come together, I thinks it a pretty good place to be at. You wake up in the morning knowing what you do and love to do, that’s one of the most important things in life. So, it’s very easy for me to be revitalized. Plus, I collaborate, play and work with so many talented people. I think a lot of that energy and talent just rub off.”

John Oates began his music quest into the industry during the early 70’s with partner Daryl Hall as the popular duo Hall and Oates. He has come from a generation of 45’s witnessing his era evolving to cassette tapes, CD’s and now digital download. He speaks about his 4 decades of music experience. “I’ve been very fortunate that I have been able to be part of rock music to some degree a rare beginning, entertaining to where it is today. Meaning that, when I first start listening to music as a little kid in the 50’s, Rock and Roll was disturbing. I heard the beginning of Rock and Roll. And then in the 60’s the transition from singles to albums…music became much more social common. I saw that whole thing in the 70’s, kind of a singer songwriter’s era. Then in the 80’s, the pop era began. Then the hip hop era began. I was part of all that. Now, I’m still making music in 2013. I’ve seen the transition from paint to digital. So it’s been kind of a unique time to be born because I was real fortunate to see entirely beginning to now of the history of American Popular music,” says the musical genius.

Not many duo’s or groups get to have such longevity due to certain situation. However, for this legend, it has been an exhilarating venture for Oates as a solo artist and as a duo. “The good thing for me is that I still work with Daryl. We still do the Hall and Oates. Today I’m on tour with Darryl right now as we’re speaking. We still actively work together. At the same time, do our separate projects…our solo projects. He got his TV show Live From Daryl’s House, which is a great TV show. The whole thing works for us, it keeps us inspired about our solo projects and at the same time we love the fans who still want to hear all the music we made together.”

The mastermind musician speaks about the time of how he came up with such only one of a kind and everlasting music with Daryl Hall. “We meet when we were in college. We both were musicians for many years before we either met. I grew up, I was pretty much involved in experimental Americana: Folk blues, delta blues and things like that. I also loved R&B and I loved Rock and Roll. When I met Daryl, that’s what I kind of brought to the table.  Daryl was much more into R&B and acapella, doo-wop, singing and even classical music. The combination of what he brought and what I brought, we combined together and it created a unique thing,” articulate says Oates.

For more information about John Oates Good Road to Follow project please visit http://johnoates.com/.  You can get the news about GRTF releases and a free song to download when you go to his website and sign up for his email list. Also check out John Oates new singles on iTunes and Amazon and stay updated with his news songs that’s coming out every month at www.facebook.com/johnoatesmusic