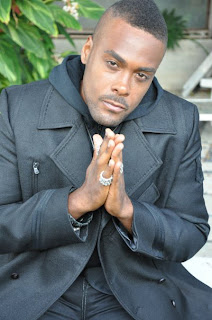 “Nothing is impressive concerning the entertainment industry,” states the talented Gary, Indiana native and actor William L. Johnson. The musician and filmmaker with an impressive resume and talent speak from the heart. “The entertainment spectrum has a negative influence on our culture. Media contains destructive images that get into our psyche.  It’s unfortunate!” The images processed, “allow us to become the very things we gravitate to.” Largely, the youth “who live in broken households and deprived [communities] fall victim to oppression.” Johnson wishes music, television, and films would be a bit more entertaining providing an educational value. “These mediums are extremely explicit leaving little to no imagination.”
As a father who lives a conscious lifestyle realizes, “entertainment [contributes] to societal problems such as the increase in teenage pregnancy, sexually transmitted diseases, and youth violence.” His responsibility as a parent is to teach his child how to differentiate the difference between reality and the perception of reality. “Without parental guidance, a child can be easily misled.” Johnson suggests love and family are important to any child to become a productive citizen to society. “It is imperative to have both parents involved in that child’s life if possible. A child needs a strong family that shows unconditional love in order for he or she to nurture and grow.” If parents do not support or love their children, “they will depend on media to define whom they are or will get the attention somewhere else.”
As a mentor, “it feels great to be an encouragement to those [uninspired] and ill-advised. It is essential to motivate people; teaching them the things they should and should not do.” Johnson proposes, “mentorship facilitates people including the youth to do better in creating a dynamic future.” He advises upcoming talent foremost youth to “create your own avenues and surround yourselves with people that are doing what you love to do.” He emphasizes, “never lose your life to drugs, alcohol, and other illegal activities that deter you from making progress and great strides. Be yourself and always elevate!”
Being aware of his surroundings cautions him on taking on stereotypical roles in film. “I like roles that have a certain edge to them,” states the peculiar gentleman. “I like to play characters demonstrating versatility perhaps a biopic of a boxer or be in a [martial arts] film.” The Blue Hill Avenue actor selects his roles demonstrating positivity. “I look and treat characters in films as individuals and not as objects of manipulation the way [Hollywood] treats actors especially of color.”
William L. Johnson wants “audiences to remember the diversity he brings in roles and in films. I want to provoke audiences emotional chord when they view my various roles in movies and short films I’m featured.” He wants audiences to be in awe with his performance. “My overall goal is to create classic films. I ultimately want to be remembered for my positive contributions in all art forms [foremost] society.”