I recently had the opportunity to catch up with award-winning triple-threat entertainer Valarie Pettiford, who is playing one of the starring roles in “Love Will Keep Us Together.”Over the years, the veteran actress has appeared in films such as Glitter, Stomp the Yard, and Why Did I Get Married Too. She has also had television roles on “House of Payne” and “Half and Half”. Here is what the diva had to say about her role in the stage play “Love Will Keep Us Together” and her latest happenings during our interview.
Aaron Robinson: Tell us a little about your character that you play in the stage play “Love Will Keep Us Together”?
Valarie Pettiford: I’m kind of an overbearing mother, but it all comes from love. (laughs) Me, my son and his girl that comes into his life; deep down I know she’s the right girl, but I’m not going to let her know that. I’m the type of mother who feels no one is good enough for my son, that type of character. Once again it all comes from love.
Aaron: What do you believe makes this character stand out from any other character that you have ever portrayed?
Valarie: It’s the writing, the characters that I work amidst, the actors, and of course you have to add Rodney to the mix as well, being a wonderful character in this wonderful play. It’s the combination of all of it…the writing and the actors.
Aaron: You have recurring roles on the CBS new series Golden Boy and the HBO series Treme. How is that going for you?
Valarie: Wonderful! I’m having the time of my life! I don’t know if Treme is coming back for the next season. It’s such an honor to be asked to join that cast for three episodes. I’ve known Khandi Alexander forever; she grew up with my sister. Just to have the opportunity to work with her and the rest of that cast, it’s just an honor. With Golden Boy I play Chi McBride’s wife. He is truly one of the most caring, decent men in the world. He is so giving to that cast and crew and he made me feel like a queen. It was such a pleasure to work with those people. I hadn’t worked in New York for a while; especially in television. It was just great to be back in my hometown with that New York state of mind.
Aaron: Having a background in stage, television and film, when it comes to acting would you say there is one you enjoy more than the other?
Valarie: Yes, I do. Anything live! I love live performances! That’s probably because you get an immediate response; it’s a visual thing that happens with you and the audience. It’s do or die. Anything can happen, and you have to make it work. The show must go on. I love anything live, that’s my preference. Don’t get me wrong, I love television and film, but I’m a theater girl at heart.
Aaron: As a veteran actress, what is your secret to your longevity?
Valarie: I would tell the youth coming up or students, to do it all, always be in show business. I’ve been very fortunate to only do show business. I think that’s attributed to the fact that I sing, I dance and I act. So if I’m not doing a play, I can do a musical. I can go do my concert work or sing in a club or just a dance show. I think my key to longevity is to just do it all and work on your craft. If you get a chance to do it all, you will always find work.
Aaron: What humbling advice would you share with young actresses who are looking to make a career as an actor?
Valarie: I’m a stickler about class and keeping up your craft. Just because you made it or that word that you define as success and you’re working, that doesn’t mean that you still can’t learn. I think that constantly learning and honing in on your craft will keep you in the business forever, or as long as you want to work. Sometimes I feel that everything is such fast food generation right now, where you can become a TV star real quickly and not go through the ropes. But it’s something about not going through the ropes, you lose your foundation. There is nothing like having a good foundation. I would like to tell the young ones to keep that foundation strong, because you will last through the business much longer. 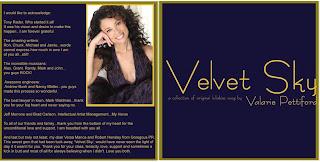 Aaron: Tell us a little about your new album?
Valarie: I have my new CD, it’s called “Velvet Sky”. What’s so lovely about this CD is it’s a combination of original lullabies. Once again, I believe music soothes your soul. We have the intent of doing this particular CD, with intensions of helping parents and helping parents bond with their babies through music. It’s available on iTunes, Amazon and CD Baby.
Aaron: Would you like to add anything else before we conclude the interview?
Valarie: I’m having the best time of my life with this cast. It’s a beautiful piece. It’s a sweet piece about love and relationships, and I always say truly ‘love will keep you together’. All you need is love, especially in the times that we’re living in. It’s nice to see that come to fruition on the screen and to once in a while get away from all the stress in life to watch good stuff happening and sooth your soul. And this show will do that for you.
Visit Valarie Pettiford at www.officialvalariepettiford.com, GMC TV at www.watchGMCtv.com
Also read interview at Consciousness Magazine http://www.consciousnessmagazine.com/ValariePettiford.html