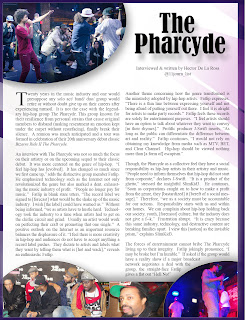 Twenty years in the music industry and one would presuppose any solo act/ band/ duo/ group would retire or without doubt give up on their careers after experiencing turmoil.  It is not the case with the legendary hip-hop group The Pharcyde. This group known for their resilience from personal strains that cause original members to disband (making resentment an emotion kept under the carpet without resurfacing), finally break their silence.  A reunion was much anticipated and a tour was formed in celebration of their 20th anniversary debut classic Bizarre Ride II The Pharcyde.

An interview with The Pharcyde was not so much the focus on their artistry or on the upcoming sequel to their classic debut.  It was more centered on the genre of hip-hop.  “I feel hip-hop has [evolved].  It has changed so much since we first came up,” adds the distinctive group member Fatlip.  He emphasized technology such as the Internet not only revolutionized the genre but also marked a dent, exhausting the music industry of profit.  “People no longer pay for music.”  Fatlip in blank stare utters, “The record label we signed to [forecast] what would be the shake up of the music industry.  I wish [the label] could have warned us.”  Without being informed, “we as artists have to hustle hard.  Technology took the industry to a time when artists had to get on the chitlin circuit and grind.  Usually an artist would work on perfecting their craft or promoting that one single.”  A positive outlook on the Internet as an important resource balances the displeasure of it. “I feel there is more creativity in hip-hop and audiences do not have to accept anything a record label pushes.  They dictate to artists and labels what they want by telling them what is [hot and wack],” reveals an enthusiastic Fatlip.

Another theme concerning how the genre transformed is the minstrelsy adopted by hip-hop artists.  Fatlip expresses, “There is a thin line between expressing yourself and not being afraid of putting yourself out there.  I feel it is alright for artists to make party records.”  Fatlip feels these records are solely for entertainment purposes.  “I feel artists should have an option to talk about whatever they want to convey [in their rhymes].”  Prolific producer J-Swift inserts, “As long as the public can differentiate the difference between art and reality.”  Fatlip continues, “I would not rely on obtaining my knowledge from media such as MTV, BET, and Clear Channel.  Hip-hop should be viewed nothing more than [a form of] escapism.”

Though, the Pharcyde as a collective feel they have a social responsibility as hip-hop artists in their artistry and music.  “People need to inform themselves that hip-hop did not start from corporate,” declares J-Swift.  “It is a product of the ghetto,” stressed the insightful SlimKid3.  He continues, “Soon as corporations caught on to how to make a profit from the genre, they [bastardized] it [bereft of a social message].”  Therefore, “we as a society must be accountable for our actions.  Responsibility starts with us and within our homes.  We can complain about hip-hop holding back our society, youth, [foremost] culture, but the industry does not give a f--k.”  Frustration abrupt.  “It is crazy because this same industry, technology, and destructive content are breaking families apart.  I view this [notion] as the invisible prism,” explains SlimKid3.

The forces of entertainment cannot bribe The Pharcyde living up to their integrity.  Fatlip jokingly pronounce, “I may be broke but I’m humble.”  If asked if the group would have a reality show if a major broadcast network negotiates a deal with the group, the straight-face Fatlip gives a flat out “Hell No!”