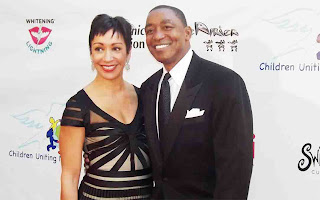 For the many years that NBA legend Isiah Thomas entered arenas across the country, deep inside he knew that he had to be a champion on and off the court. On the basketball court he became a 2x NBA Champion during the years of 1989 and 1990, earning a great amount of achievement and recognition throughout his career. Off the court he had a passion for giving back to at-risk, economically disadvantaged and underprivileged youth, leaving a legacy behind as a community hero.

I had the opportunity to speak to the NBA Hall of Famer. He received the Lifetime Humanitarian Award for the Children Uniting Nations 2013 Awards Celebration and viewing Dinner. “It’s a great honor, not only is it a great honor, it’s one of those honors that was totally unexpected. You always go out in the community and you try to do good things for others and you’re never looking to be honored for the things that you do. But it’s nice that we are being recognized for the work that’s done,” proudly says Thomas.

Over the years, Thomas has received a vast amount of awards for his philanthropic work; he emphasizes how this particular award is different. “A great majority of them [awards] has been about sports. What I was always taught is what my mother and father always preached, inside the household was, which to try to use the sports platform to go out and help others and to better their lives and changes lives within the community.” Thomas continues to converse on the subject of changing lives, as well as the significance and importance of his relevance of the Lifetime Humanitarian Award. “Being awarded for actually effectively changing peoples lives as oppose to entertaining them makes a huge difference. It’s definitely the type of award you want to receive because of better humanity,” calmly says Thomas. Recently, Thomas has had a career of coaching for teams such as the Indiana Pacers, New York Knicks and Florida International University (NCAA). With a great quality of success, he never forgets where he comes from. “Every day, every inkling day of my life I reflect back to Chicago and the things and lessons that I learned growing up on the Westside of Chicago, [those] are the things that I carry with me today in terms of values ,the educational belief and the community that I came from. Although we were very poor and poverty was rampant running throughout the community, social conscious at that time has proven to the community and our family of becoming educated, and I live that today.”

Isiah Thomas’ foundation, Mary’s Court Foundation (established in 2010), has provided students with paid tuition as well as scholarships to attend college. He talks excited about the inspiration of the foundation that has been a blessing and has made such a tremendous impact on so many people’s lives.  “It’s basically honoring my mothers work…her lifelong work. My mother’s name is Mary Thomas. A street was named after her in Chicago for all of the community work she was doing in the neighborhood. And being her devoted son, I wanted to continue her work and continue to help others, not only in the community and the Westside of Chicago but the communities throughout the world.”

In the future, Thomas is looking to expect new and exciting things to happen with his foundation as he continues to work with municipalities in different cities. He has teamed up with the Chicago mayor, Rahm Emanuel in regards to helping combat the teen violence. He talks briefly, discussing the importance of education, while giving advice for at-risk and underprivileged youth. “Stay connected to the educational system and you’ll have a chance to be successful. The ground is spelled out and it’s spelled out pretty specific and plainly; grade school, high school, college, graduate, get employment and enter into the workforce.” Unfortunately, there are those who fall by the wayside or stray away from the educational system. Thomas discusses the reality of those situations. “There are some of them who would try to shortcut that and that’s when you get into criminal activity. I do not believe that sports and entertainment glamorized is the way out of poverty. Now, there are some of us who has benefited from sports and entertainment; those are few and far between. There are more lawyers and doctors and journalists who are much more successful through the educational system than we have been to the sports and entertainment.”

Collectively, Thomas expresses his thoughts and illustrates his deepest support to others. He applauds those who have similar backgrounds as he once had as a youth, as they overcame abject poverty and challenging moments that many may have endured while living in underprivileged areas. “The more we can talk to all youth about some of the things that you’ve gone through and how we come out of that poverty stricken environment, I think those stories are important. You know basketball is a physical platform, but it’s not the only way to be successful.”

Sincere about the well-being of our youth’s future, Thomas closes by sharing top-shelf MVP advice. “Our kids are worth saving, and they’re worth fighting for and they’re worth being invested of time. If you can’t give intuitive, give them your time, having conversations and being strong mentors. You have no idea how much you’re helping that kid just by being their present and not necessarily just writing a check and hoping that someone else could show them.”