Devine Carama - Kingtucky Review
Written by Hector De La Rosa @Here_2_Edutain_
Hailing from Kingtucky (Kentucky) as the album title suggests, is an emcee who appropriately symbolizes E=MC^2: Extinguishing false Master of Ceremonies with formidable and fathomed pen game and variability and brazen linguistics to the second power. Devine Carama is the prodigious kid birthed by golden era’s birth canal that came equipped with a gold chip tooth, gold-plated crown over his head, and a platinum coated microphone born ready to fulfill his life’s purpose of carrying on tradition of safeguarding the elements of the genre (“For The Culture”). 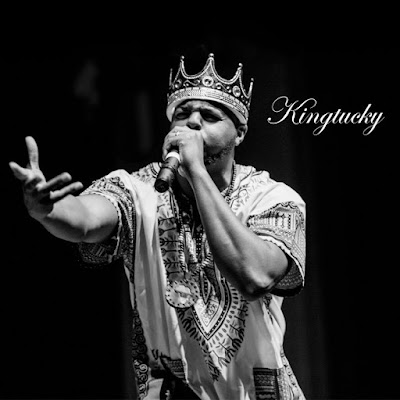 Hip-hop, pimped for her chasteness by hip-hop caricatures of travesty, has lately been the orthography of hip-hop fuckery evidenced in “Devil Stole Hip-Hop.” This alone made Carama “Gather My Thoughts” by verbally assaulting the reset button where the genre’s reversals once became the standards. The emcee whose vocal technique is reminiscent of Eminem, Talib Kweli, and AZ breaks the mold by challenging the wack with “Tesseract Bars” of having the ‘knowledge of a teacher’ whose “Couplets of the Holy Grail” constricts and cripples the larynx of an emcee in the middle of a cypher making the rapper lose as a frail shook ones.
Carama comes off as earnest same time sarcastic.  He comes to shut down all competition and snatch trophies from rappers claiming the best in swagger in the tribal sounds of “B-Boy Burial.” The song takes an interesting take as it borrows from the infamous ‘A Nightmare on Elm Street’ chant. The lyrics are verification, ‘One, two I’m coming for you/ Three, four better not record/ Five, six get your crucifix/ Seven, eight emcees better pray/ Nine, ten repent for your sins. Eleven, twelve you’re going to hell.’
Carama is the nicest when he flips The Notorious BIG’s single “Ten Crack Commandments” to craft his own approach in song titled “MC Commandments/ Show & Prove.” Those that partake in the genre need to adhere as he mandates decrees and statues. It lyrically begins with the simplest but substantial guideline, ‘If the culture aint within your soul/ we don’t need another vulture perpetrating for the dough.” Then he expands, ‘Write from the heart/Try to envision the time…Memorize your lines/ Never read it from your phone/ You don’t need a hype man/ You can do it on your own/ If you do get it poppin’/ Don’t burn a bridge.’ He is viewed a savior in giving advice to those upcoming talent on lessons learned to prevent their own demise.
Carama is praised by the forefathers of hip-hop as he is the equinox of classic with average, balance with imbalance, and perfect with the imperfect that pays homage to the hip-hop greats from Nas, Jay-Z, Common, to Talib Kweli.
Kingtucky is the most properly sequenced album that tells a story from beginning to end and is one of 2016’s best musical undertakings making Devine Carama “Rather Unique” as one of the few underground greats on his way to hip-hop’s promise land.