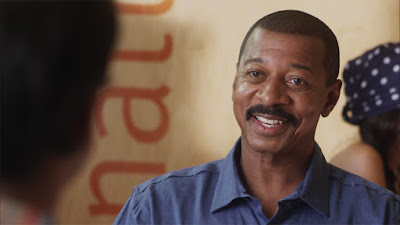 Extensively known for creating classic films such as The Five Heartbeats and Hollywood Shuffle, filmmaker Robert Townsend will star in the UPtv premier Playin’ for Love, in which he directed, produced and co-wrote with Michelle Amor and Cheryl L. West.
Playin’ for Love is a romantic comedy about life and basketball. Robert Townsend plays Coach Niven Banks, a high school coach who gets a superstar player, where as the mother of the superstar player tries to take over his team. The film also stars Salli Richardson-Whitfield, Jenifer Lewis, Lawrence Hilton-Jacobs and Esai Morales.
In the future, Robert Townsend looks forward to remaking the movie Brewster’s Millions. I (Consciousness Magazine) had the opportunity to interview a man of integrity and humbleness. Here is what the legend, Robert Townsend, had to share regarding his latest movie Playin’ for Love, which will premiere on the UPtv on Sunday, July 12 at 7 p.m. EDT / 6 p.m. PDT.
Aaron Robinson: Hey Mr. Robert Townsend, it’s an honor to interview you sir.
Robert Townsend: Aw man, thank you for taking time to talk with me! It’s an honor. Whatever you want to ask me, I’m here.
Aaron: You play Coach Niven Banks in the UPN movie Playin’ for Love. To you, what was special about playing this role?
Robert: It brought together a couple of loves of mines. I love basketball and I love that side of it. There’s a movie I grew up on called Claudine about a single mother. Diahann Carroll is in it with James Earl Jones. I always wanted to do a love story about a single mother and a guy…an unusual love story. It brought together the need that I had to tell a story, a love story.