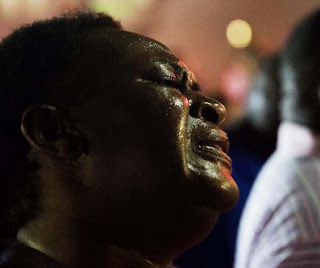 Nine people are confirmed dead in Charleston South Carolina where a 21 year old white gunman named Dylann Roof  shot multiple people as they worshipped during their evening bible study at the historic Emanuel AME church which is the oldest Black church in the South.
In a press conference, Police Chief Greg Mullen confirmed this act of terrorism as a “hate crime” and said, “It’s unfathomable that someone in today’s society would walk into a church where people are having prayer meeting and take their lives away. We will put all of our energy in finding this individual.”
The importance of Emanuel AME and the historical elements that makes this church so significant to American culture is critical in understand this heinous shooting.  It is also imperative to understand that Black Churches have always been targeted in hate crimes. The 1963 Birmingham bombing that killed 4  young girls during Sunday School is one of the most visible displays of this.  The Black church has always been nucleus of leadership and community organization. Dismantling the church and interrupting the simple act of worship while instilling fear has been a strategy for racist extremist since slavery.
According to the church, the history of Emanuel African Methodist Episcopal Church reflects the development of religious institutions for African Americans in Charleston. Dating back to the fall of 1787, Richard Allen founded the Free African Society, adhering to the Doctrines of Methodism established by John Wesley. In 1822 the church was investigated for its involvement with a planned slave revolt and uprising by church co-founder Denmark Vesey. During the Vesey controversy, the AME church was burned. Worship services continued after the church was rebuilt until 1834 when all black churches were outlawed. The congregation continued the tradition of the African church by worshipping underground until 1865 when it was formally reorganized, and the name Emanuel was adopted, meaning "God is with us.”
During a prayer circle after the shooting a member said, “If we are not safe in the church, god you tell us where we are safe.”
Written by Abesi Manyando
@abesipr