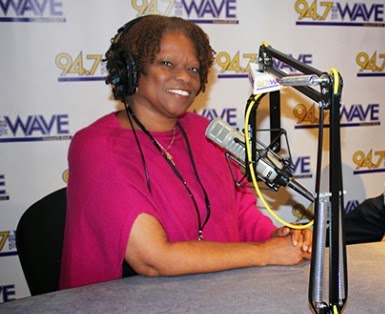 Famous and award winning radio host, Pat Prescott, has subdued many listeners and fans to fall in love with her incredible radio voice over the last several decades. Prescott began her career as a teacher and eventually ventured into radio as the opportunity presented itself. Taking on the challenge, she would get her start in New Orleans on WYLD-FM. She would later move on to work at WRVR jazz station in New York as a music director and mid-day announcer. As her career advanced she went on to hold numerous positions on WQCD, WBLS and WLIB.

Today, Prescott has a morning show on The Wave 94.7 in Los Angeles, “Pat Prescott in the Morning”. I had the privilege to interview this phenomenal woman. Here is what she had to share regarding her career and journey becoming a renowned radio host.

Aaron Robinson: When you take a look over your career, from when you first started off as a radio personality, did you ever foresee yourself as being famous and an award winning radio host?
Pat Prescott: Part of the reason that I got into radio is because I met some other people who were in radio. I said, “if they could do it so could I.” I always sort of had a pretty strong self-belief I could do this. I think what has surprised me more than just the longevity that I have had, is that I’m still doing this after almost 40 years.

Aaron: At a younger age, when did you realize that radio was something that you were going to pursue?
Pat: I did not realize it until I was out of college, really! [Laugh]I always wanted to be a teacher; that’s what I did when I got out of college. I was an English major in Secondary Ed. I was at Northwest University, which has one of the finest radio, TV, and film schools in the country and I never went in the building because that was not what I was into. It wasn’t until later that I was on summer break from teaching and I just happened to meet some people who were involved in a disk jockey convention. They asked me to be a hostess and after that weekend I was like, ‘you know, I think I can do this!’ So I went to broadcasting school at night while I was still teaching. I always loved music. I always use to be the DJ at the school – when we would have a party I was the one who would play the music. My dad loved music; I grew up with a lot of different music in our household. So, music was always a part of my life, but I really never thought about a career involving music until I went to that convention.

Aaron: What do you believe was some of the most challenging aspects or obstacles of your career that you had to overcome in order to be successful?
Pat: At first when I started there weren’t really a whole lot of women in radio. Most stations only had one female if they had any. Usually she was on from 7pm to midnight. Also, another big obstacle is getting started in a big market at a well-known station, because it’s just hard to break in like that. I was fortunate because I was in a smaller marker, I started in New Orleans. I think that kind of worked for me.

Aaron: Who has been some of the most interesting individuals you have ever interviewed or had the opportunity to meet?
Pat: I think Luther Vandross was always one of my favorite people. We got to be friends and that was awesome. That was a great experience for me. I interviewed Natalie Cole once and that was kind of cool. She was lovely and just to hear stories about her and her dad was very inspiring for me.

Aaron: As you mentioned earlier, you were also a teacher for a number of years. Regarding education, what do you think is missing when it comes to reaching our youth in terms of those who are lost and hopeless?
Pat: I think the school doesn’t do enough to teach kids how to get a job because that’s what you have to do when you finish school. School doesn’t really identify what you would be good at, and to realize that you are going to have to work and direct people more as in terms of  getting exposed to different kinds of career options. School can do a much much better job of that.

Aaron: Do you have any words of encouragement or advice for individuals who are seeking to go into your line of work?
Pat: Radio has changed so much since the time that I have been in the business. Opportunities are really not like they use to be and I see that it is just real important to stay on top of technology and be aware of all the current technology and the opportunity that those things create for you. The radio business that I got into 30 years ago is a completely different feel today with what I feel is a lot less opportunities for people to become announcers, but there are opportunities to create your own platform because of technology. Many people are online, on Youtube, or have internet radio stations. People are making their own online TV programs and are putting them directly onto the internet. I think technology drives a lot of what happens and if you’re interested in radio today you really need to be on top of technology and be creative - creative to come up with your own ideas and concepts.

Aaron: Great Advice! And before we end the interview Pat, would you like to add anything in closing, or anything that we haven’t discussed that you would like to talk about?
Pat: Just that I really appreciate my parents. My dad was my hero; my mom is my role-model and my best friend. I realize that not everybody has it like that. The older I get the more I value them and the start that they gave all of us and my siblings to help us to success, to help us to believe in ourselves, and to create experiences for us where we would be able to try something and to succeed. They would put us into everything you can think of. I think that has made a big difference in whom we are today.


Listen to Pat Prescott in the Morning at
http://947thewave.cbslocal.com/show/pat-prescott-in-the-morning/