A Talk with Babyface

I can now check off interviewing Babyface on my bucket list for 2014. I had the ultimate experience and pleasure of interviewing the talented songwriter, singer, and producer about the release of the much anticipated album with Toni Braxton. Now if I can only get him to be my songwriting mentor.

SF: What should listeners expect from the album Love, Marriage & Divorce on February 4?
BF: More than anything we just tried to put some music together that tells a story of relationships but to really feel good and I really concentrated on people being happy and caring. I just love Toni’s voice so much. It’s just nice to hear an album with her voice. 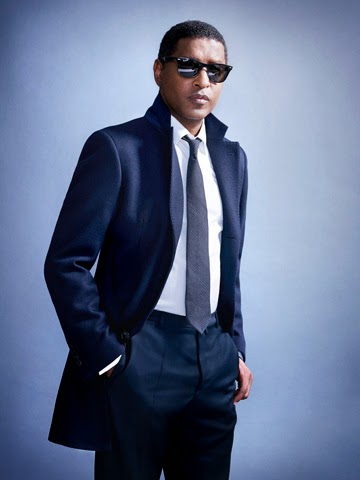 SF: What message will the album convey?  What is your favorite song on the album and why?
BF: The album we put together was a combination of our ideas of what we both went through which were love, marriage, divorce, and the emotions that you build. Toni was more on the divorce part and kept going down that road. Initially we were trying to do it almost like a play in the beginning being love, then marriage, and divorce and it felt like it was choreographed. Ultimately it became a collection of thoughts that dealt with the stuff that people go through.

I don’t know that I have a favorite song on the album yet. I like the feel of the new album. It has a very good feeling to it.

SF:  Tell me about the tour and does the tour entail Fayetteville, NC?
BF: We are talking about definitely going out this summer and do some touring together and we also do our own stuff as well. I like Fayetteville. I was there years ago when I was in the Deele and we played in Fayetteville and we loved it.

SF: Have you ever thought about doing a project with the Deele again?
BF: If L. A. Reid decided he wanted to do it then yes I would do it.

SF: I have written two songs that are on albums and would like some tips on songwriting. What is the key to writing a hit song? Where does your inspiration come from when you are writing?
BF: I don’t know if there is one answer for it. Ultimately it comes to having a great concept, a great melody, nice chords that go along with it, and something catchy. Sometimes it can be something simple and sometimes it can be complicated. It is hard to know for sure. So you get lucky if you get one.

SF: Do you ever experience songwriter’s block?
BF: Sure and you just chill out and don’t worry about it and don’t do anything. Wait for a while and then come back to it. It will probably come back to you.

SF: Which artists do you listen to?
BF: I listen to everybody and everything on the radio new and old. I have favorites in every genre. I listen to classical, country, rock, pop, hip-hop, and all of it. I just love music.

SF: What will you be doing ten years from now?
BF: Hopefully the same thing. I like what I do. If I can do this until the end this is what I will do. Music is a big piece of my life. I have been blessed to be able to do something that I love to make a living with. I would like to be doing the same thing.

SF: When did you first realize that you had a love for music and songwriting?
BF:  Probably when I was in sixth grade and about 11 years old.

SF: What advice would you give someone who wants to be in the music industry?
BF: The love of music is probably the most important part. You just have to have a real passion for it. No matter what happens you are doing it because you love music so you will still be happy with it. Sometimes things work out and sometimes they don’t. A good part of my career has worked out and I do it because that’s what I love. I think it is all about your passion.

SF: If you were not a singer/songwriter/producer what would you be doing for a living?
BF: I would have been a camp counselor. That is the only job that I have ever had. That is something that I love.  I love working with kids, going camping, and being outdoors.

SF: Future projects?
BF: I’ve been working on a project with Barbra Streisand, Colbie Caillat, and getting ready to do some work with Aretha Franklin for an album she is going to do. Those are the main ones I am concentrating on.

SF: Thanks for the interview! I wish you continued success.
BF: Thank you.