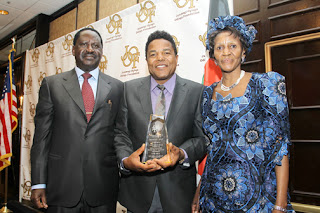 Tito Jackson: The Man Behind The Love, The Music, and Now The “Ambassador & Honorary Citizen to Kenya!”

EH: Tito, tell us some of the other things about your new appointment to Kenya that we may not have covered that is of great importance to mention.
TJ: Lee, you know, we’re just going to spark things out. I’m going to be looking at some things such as doing some shows to raise funds. We are going to be autographing Michael Jackson’s shirts that he had as another way of raisings funds and putting together lively programs. So, this is basically where we’re standing right now.
EH: So, you do have a band right now that’s going to be performing?
TJ: Yes, I have a band. I have a lot of other artist as well that are willing to help us out, which makes it a little easier.
EH: Does your appointment as Ambassador allow recruitment through you into The JOOF?
TJ: Yes, there will be people! Absolutely, and like anyone that has knowledge of things like medical supplies, food, papers and anything that will be helpful.
EH: With the love, the gift and the talent for music already in your heart Tito, regardless to your new position; you have a new CD released or due to be released as we speak. Tell us about your CD, and where we can get a copy.
TJ: My new CD is called “So Far So Good”, and my new single is titled: “We Made It!” You can download it on I-tunes and other sites. That’s basically where I am right now. I recorded my CD now for two years, because I had taken a break after Michael’s death. Now I’m finishing it up and releasing it.
EH: To the best of your knowledge Tito, are any of your brothers doing any music projects at this time?
TJ: Well, Jackie has a few projects with his son Siggy. Other than that, I’m going to have a conference later today with my brothers and we’re going to talk about some things. Jermaine was working on some things a couple of months back, but we’re all going to be doing some things with the show.
EH: Tito, everything we accomplish has its own price in one way or another. What would you like to say to upcoming entertainers that will prepare them for this new way of life?
TJ: Well, some things have changed over the years. We now have such things as the computer, which wasn’t there when I came up. Now there’s writing, and other programs available, so there wasn’t a whole lot of monkeying in the studio because of the high cost of studio time each day. That’s what makes it so easy for these writers now, because you just have the good stuff and you can put it on I-tunes, YouTube, your own website… there’s a lot of music that has become very popular that way. Now that’s the good thing about it. The bad thing about it is who the company you’re with is. There is so many free downloads and things of that nature. Basically, there is no way for the artist to promote in order to drive the audiences to your live performances. For the musicians, it shows that they really have talent; they have the love for the music and are doing their thing. So it’s nothing wrong with it.
EH: I just want to tell you from my heart that being Michael’s age, I have always loved you guys and your music. I must also say that sometimes we get caught up in what we receive from people instead of looking into the hearts of them.
When Michael sang the song, “With a Childs Heart,” I knew where he was coming from because we sometimes allow ourselves to grow up too fast and before we know it, we have already stopped living. Nobody has to tell you that Michael was a beautiful person; I also know that Mike got his lead from you, Jackie, Jermaine, Marlon and Randy while sharing your love around the world.
TJ: Thank you very much, I really appreciate that!
EH: I would ask that you tell your family that I love them and I’m there in heart and spirit with the loss of Michael. Your father and mother raised a great group of kids and it wasn’t all about the music to say, but most of all it was and still is about the love and care you all have for others; God Bless the Jackson Family and bless your quest to assist the People of Kenya and their needs.
TJ: I would also like to tell the people that we thank them very much for what they’re doing and we love them very much for that and God Bless them!
EH: Thank you so much Tito!
TJ: Thank you also and God Bless!

2300 Jackson Street, “I’ll always find my way back home!”
As my wife and I stood outside the door of the Holy Terrance where Michael Jackson is laid to rest, passages of his life flowed through my mind of some of the sad moments in his life. Barely viewing the tomb that held his remains, the darkness of his resting place caused a heavy weighing on my heart.
I thought about how Michael has basically had to live his life in darkness because of media and public opinion that really knew nothing about this man, “Michael Jackson.” I just couldn’t help but pain for him even in his death, being placed in darkness away from the rest of the world he was born in.
When I think of, “2300 Jackson Street,” a song that was performed by The Jackson Family, singing about them being raised up in the small town of Gary, Indiana and how as Tito say, “Gary will always be home!”, something very touching came over my mind.
I and many other fans of this very special and blessed Jackson family feel that it would be of great dedication to Michael if he was to be returned to Gary, Indiana for permanent burial, “Back to where they started from!” Sometimes the life we live has a way of wrapping us into the world of public expectancy, but when it all ends for us, we should at least be rewarded with a resting peace into the light and outside of darkness.
Tito and the rest of his family is now the only gateway to who Michael Jackson really was as a person and they deserve the right to be able to lay him to rest where and how they choose. With the fact that no other human being on earth had drawn the attention, love, joy and finally the sadness after passing through this world, it is my opinion that Michael Jackson was then and is still the most loved, famous, and popular person of all times. There has been many great people according to their works, but Michael was a special man which his credits has to be given to his entire family from the teaching, love and tough love of his parents, to the love, unity and camaraderie of his brothers and sisters. So many would love to know that Michael Jackson, “The man, The person, The brother, The son, The King of Pop,” was back home, “2300 Jackson Street!”
Let’s continue to bless the Jackson Family with our prayers and support and become a part of the new mission Tito has accepted as, “Ambassador to Kenya.”
-Elder Lee M. Harris, Sr.
… [Read Full article in Tito Jackson cover edition. http://www.consciousnessmagazine.com