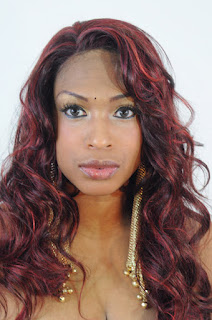 Eager, enthused and confident are only a few of the words that describe the natural talented, sexy and energetic Pop recording artist, Tanay Jackson. The strong-minded singer does not settle for less, as she rises to fame in a dominant recording industry. My conversation with the daughter of legendary member of The Jackson Five/The Jackson’s guitarist, Tito Jackson, is unforgettable, as her determination, passion and love for music will leave a special place in the heart of many of her fans and countless people around the world.
Excited about the interview with Consciousness Magazine, Tanay exhales as she talks about the hurt she endured over the years from not having her father in her life. While growing up in NY and Maryland with her mother, there were many events that took place in her lifetime that were abnormal; however, Tanay grew to overcome these obstacles. I can hear the forgiveness in her heart while she voices her thoughts. “We all make mistakes and have to learn from them.” Since then, Tanay has grown to love and build a great relationship with her father as she lives for the present and future, putting her past behind her.
Going through trials and tribulations like any other family, Tanay seems to be humble, while remaining warm-hearted and kind. She speaks about her career and when she realized she wanted to take her professional dancing, amazing songwriting and profound musical talent to a mainstream level. “At a young age…5 years old, my grandma, my mother’s mom noticed it [talent] at a young age. She wanted to give up her nursing practitioner career to be my manager.  My fourth grade music teacher noticed it [as well].” At the age of 12, Tanay began writing music and poetry. Intensely, she would shock the world by storm with her incredible stage performances.
Of course, the journey would be a task as the young prodigy grew to perform and perfect her craft.  Eventually, there would be pressure on Tanay to reach a potential status as being a Jackson family member. She thinks straight forward and progressively explains. “People say I sound like my aunt [Janet] and remind them of Michael on stage.” Trying to stand out alone could be challenging for the talented performer when it comes to her unique image. “I’m trying my best to stand out of the box and to stand out more. Everywhere I go people will say I remind them of them [Janet and Michael],” sincerely says Tanay as she continues to work hard to stand out from her famous aunts and uncles.
During the year of 2006, Tanay had attained a Bachelor degree of Arts in Business Management. As a performer, the degree was only a small portion of her success. “[The degree] taught me how to handle business matters and conduct business mannerly. I learned music and got a couple pointers from my dad.” Tanay seems to be courageous and undertaking as her music directed her away from her other dreams. “I tried to learn aviation… music steered me [away from it].”
However, as a business woman, one of her greatest challenges has been operating Roth Entertainment and Lunar Music while pursuing a career as an artist. She expounds strongly. “[It’s] the challenges…it sucks! (Laugh) Right now, I can’t even focus on my company. With my company, I did college tours, performed for elderly and the kids. I stopped it to work on my CD and stuff.” On the lines of her music career and being in a family with such immense talent that may be a façade to many, in all respects, one could not pursue an interview without mentioning the greatest superstar that walked the planet, her uncle, the late Michael Jackson. “I never got to see him as often. When I did, it felt like I had a friend and he felt like I had a lot of talent. He told me to not give up on my dream. I was learning to dance then and I remember performing in my first performance. There is no real word to say how I feel. I can tell you how I felt! He never told me anything negative. He was warm and kind.”
In the future Tanay expects to continue to perform and take up more endeavors. “Maybe I’ll do movies [I want to] grow and take Roth Entertainment and Lunar Music to another level. I want to take artist under my arms. Someday, if I decide to have kids, I want to teach my kids what I know and take them under my wings.”

Over the years, Tanay has taught Hip Hop and Modern dance at the Dancers Workshop in Brooklyn. She is also a strong supporter of the Fresh Air Fund and advocate for the weight loss community. To stay updated with the latest happenings of the rising star, visit Tanay Jackson social networks. Twitter: @TanayJackson, Facebook: Tanay Jackson, and Youtube: 7Tanay7