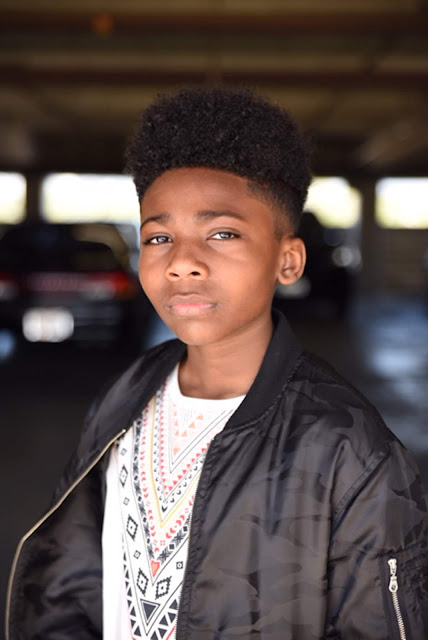 Currently starring on Disney Channel’s Sydney to the Max, actor Christian J. Simon, showcases his undeniable talent to his viewers and fans at an extremely young age. Some of his works include him guest starring on Hulu’s original series Future Man, Netflix’s Alexa & Katie, HBO’s comedy-drama Insecure and is also recognized for his voiceover on the Cartoon Network series The Amazing World of Gumball as Darwin Watterson.
I had the opportunity to chat with the acting sensation regarding his career and latest happenings. Here is what Christian J. Simon had to share with the readers.
Tocarra Eldridge: Hello Christian, how are you?
Christian J. Simon: Good! How are you?
Tocarra: I'm doing well! Thank you so much for taking the time out to interview today with Consciousness Magazine.
Christian: Oh, no problem. Thank you for having me!
Tocarra: It’s my pleasure! Are you ready to begin the interview?
Christian: Yes ma’am!
Tocarra: Your acting debut started in 2016. You have accomplished a great amount in the past several years. What type of gratification is that for you?
Christian: It makes me feel very good to know that I’ve accomplished so much in such a short amount of time.
Tocarra: You play the character Leo on the Disney Channel’s, Sydney to the Max. How has that role been going for you? Can you tell us a little about that?
Christian: It’s been going very very well! I love playing Leo because he’s always like “Now, I don’t know if we should do this!” But he takes his job very seriously. That’s something I also like about him.
Tocarra: You also pursue the voice over as Darwin on The Cartoon Network’s The Amazing World of Gumball. What type of experience has voiceover been for you as oppose to acting?
Christian: Both of them…I do like both of them a lot because I can definitely become a character. I realize with voiceover, it’s so cool because you can change your voice any time. The characters that they have are so animated and full of energy. I love it!
Tocarra: Nice, very nice. What was your inspiration for wanting to act?
Christian: My inspiration for wanting to act would definitely be from watching TV. I would watch so many stars on TV and I’d say ‘man, I really want to do that!’ You know, I always really just had a big personality and knew that I would always grow up to make people laugh. That definitely has always been my inspiration.
Tocarra: Oh okay, so it has been a passion of yours for quite some time now?
Christian: Yes ma’am!
Tocarra: You are also a dancer. When did you discover that you could dance…that you had that amazing talent as well?
Christian: Well, when I discovered that I can dance is when I started dancing with my grandparents. We use to always dance around the house. I’m from Louisiana so we would have that soul music playing, so it would always be fun. Then after that, I realized that I really love to dance. I went to a dance studio and I started to do professional dancing there. And when I moved down here (California), I have been taking dance classes every day.
Tocarra: Wow! Very Nice! Do you have any inspiration or words of encouragement for up-and-coming or aspiring actors or entertainers who would like to be successful just as yourself?
Christian: Definitely! Just always believe in yourself. Never give up and always be confident.
Tocarra: Great advice!
Christian: Thank you!
Tocarra: You’re welcome! Before we close the interview, would you like to add anything that we have not discussed?
Christian: Be sure to watch Sydney to the Max. It comes on every Friday at 8:30pm on Disney Channel. It’s a family oriented show and everybody in the family can relate to it. It’s heart-warming and always has a lesson that you can relate to.
Tocarra: You're doing great things! Thank you so much for your time and have a wonderful rest of the day.
Christian: Thank you, you too!
For more information on Christian J. Simon visit:
https://twitter.com/christianjsimon
https://www.instagram.com/christianjsimon