The Life & Many Gifts of Demetria McKinney 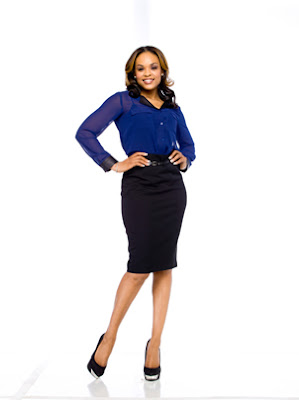 Humble, lively and down to earth are only a few qualities that describe Demetria McKinney who stands strong and confident as a beautiful and vibrant woman. The talented actress is currently starring in the TV One sitcom "The Rickey Smiley Show" as Monica, Rickey's ex-wife. I was fortunate to interview the astonishing woman who gave Consciousness Magazine insight about her role on "The Rickey Smiley Show", as well as shares her latest happenings. “The producer of the show is BobbCat Films and I worked with Roger Bobb of BobbCat Films with the Tyler Perry studios. He was the executive producer and he was actually the guy that I had to audition for. But he knew my work and he offered me a couple of opportunities to audition for roles and I really liked Monica, for a couple of different reasons. So I auditioned, and the rest is history,” says McKinney.

Excitedly, McKinney begins to briefly mention what she likes about portraying the character Monica. “[Monica], I think to be the person people love to hate to love. She is the twenty first, twenty second century woman. She’s driven, she’s driven minded, she’s busy and I think that has taken a toll on her family because she is not necessarily the stay at home mom that Aunt Sylvia (Roz Ryan) would like for her to be and not necessarily in reach or tangible to her kids. She is the type of person that is going to take the flack in her family. She is trying to get her family back, not necessarily the marriage, just the unity. So she’s a lot of fun. She made me take a big look at myself when I started reading her part,” articulates McKinney.

“The Rickey Smiley Show” consists of many talented cast members: Ray J, J. Anthony Brown, Roz Ryan, Jay Lewis (Lil JJ), Ajiona Alexus, Gabriel Burgess and Noree Victoria. McKinney gives highly recognition to the talented and humbling individuals. “Man, we have so many different levels of different experience in this…that it’s exciting! I’m learning from everybody because everybody is giving. It’s an amazing amazing cast, an amazing group of people.

Over the years McKinney has starred in several of Tyler Perry plays and films. On the comedy series “Tyler Perry's House of Payne” she portrayed a drug addicted mother and wife who turned her life into a successful career woman which later won her a Prism Award. She speaks about her experience working with Tyler Perry. “Tyler Perry is a trendsetter on so many different levels. Working with him, I’ve grown a lot, I’ve learned a lot. I’ve never taken an acting class. So, each role he’d given me I’ve taking as an opportunity for on the job training. And I just try to watch those around me. I’m a life watch. I watch people, so I just try to take in much from people as I can, because I never know when I’m going to get an opportunity to present that person to the world.” Some of McKinney’s other film credits include “Daddy’s Little Girls”, “Breaking Up is Hard to Do” and “Why Did I get Married”, just to name a few. The brilliant actress will also have a role in the soon to be released movie, “Let the Church Say Amen” directed by Regina King.

McKinney is also a talented singer, dancer and model who has continued to master her creative gifts with determination and persistence, reaching a high level of accomplishments in her career as an entertainer. “In this line of work, love yourself before you ever get in it. Know who you are, know what you are capable of, know [the things that] you won’t do. Know that this business is 90% no’s. The more you know yourself the more comfortable you are in the skin, and the talent that you have, the easier it would be to navigate though this because you won’t have to go through so many of the challenges,” sincerely says the triple-threat as she shares advice to women who are striving or longing to have success as an entertainer.

As an R&B singer, the rising diva has opened for national recording artists such as Tank, Anthony David and Dwele. “Life was actually my outlet and everything I’ve been through, music has always been there with me as well. It was my first passion.” McKinney is currently working on her CD with Brian Michael Cox and Musiq Soulchild. Her role on “The Rickey Smiley Show” has allowed her to have a flexible schedule. She explains. “I wanted a role that will still let me be seen but to give me the latitude and freedom to do the music. The music is just about done. We’re mixing and mastering right now. The single is going to be called “I still Believe in Love” which is a duet with Music Souldchild. We actually just shot the video and it was my first one and that was exciting! And I hope that everyone will support it as much as they are supporting the acting.”

When it comes to giving back and building a strong community, McKinney makes it her effort to partner with organizations throughout Atlanta and around the country, making a positive contribution to society. She volunteers her time empowering young girls, as well as speaks to women who face substance abuse and domestic violence abuse. “I take every opportunity I get to speak in forums, in schools, in events about the things we as women, not just African American women but [what] women go through on a daily basis. I am a product of molestation; I have been homeless; I am a single mom. I have been beaten up by my significant other. I had my share of life experiences, but I’m a living testimony that your past is your past. You decide your future,” strongly conveys McKinney who has been a beacon of light as well as helping women recover from problems such as life tragedies and jobless women who have been in the military. “I’m starting to work very closely with them. I try to make sure that I reach out as much as possible. It’s not even that I’m tied to one specific organization, if they call me and they let me, I’m there,” passionately says McKinney as we end our conversation.