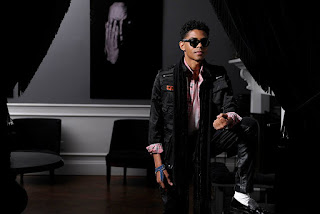 Rising star B Howard is definitely a music prodigy who has made a transition from an accomplished record producer to a successful recording artist. The talented music mastermind takes his gift global, giving listeners a sound that is unforgettable.

B Howard has come a long way since the age of 6, playing on a shoe box with a pair of drumsticks to having an amazing vocal and dance energy unlike any other artist of today. Inspired by music greats and artist such as Nat King Cole and Frank Sinatra, the self taught keyboardist knew that it was destined to fulfill his calling as a musician. Artists he has worked with include individuals such as Ne-Yo, Trey Songz and international superstar Kumi Koda just to name a few, while having immense pride in his company, 6 Point Entertainment, with partner Jonnie Forster.


Creating a name for himself outside of his mother Miki Howard, and various media rumors of the late Michael Jackson being his father, the extraordinary talent is confident in his future as an artist. In 2010 his album GENESIS debuted, as he quickly became an international star for the Asian Pop Music scene.

I had the opportunity to interview B Howard in regards to his inspiration and passion for creating music. Here is what the humble artist had to share with the Consciousness Magazine readers.

Aaron Robinson: Tell us a little about the talented individual we know as B Howard?
B Howard: I wish I could say I’m just a normal average guy but, that would be a lie. I’ve never had a “real job” besides music and since I’ve been a teenager, I’ve been able to support myself and not be dependent on anything or anyone besides music. Despite having a home to go to, I stayed in studios, slept on couches for years so I could grow as a musician, vocalist and producer which all helped get me ready to share my musical gifts with the world. Stepping into the forefront of my musical creations, I now understand the artist-fan relationship directly and it’s powerful and that’s what fuels me now.

Aaron: Outside of being self-taught, were there any other ways that you empowered yourself to perfect your craft as an artist?
B Howard: Well, I simply feel music... at times I feel like music is what I am. It flows through so naturally, without disturbance and I always want to get better. I see all the greats around, watching them on Turner Classic Movies (my fav channel) and reading about them in history inspires me and I’d like for them to look at me one day and say...GOOD JOB!

Aaron: You toured as an artist in Japan. Is there a challenge making a transition from an International audience to being recognized as an artist in the United States?
B Howard: It’s not a hard transition at all. If you look at music- the universal language, it has to do with people. It’s surprising to me that when I go to Asia to record, I’m featured on Asian artists’ songs singing in English. The videos, interviews, and performances out there helped fans discover me here in the States and it just goes to show that there’s no rules on how to build your career. Go to where your audience is, get their respect, and then go to the next market and soon, the fanbase will start connecting all over the world – if they like you. I was thankful to have some early fans here in the States like MTV, Allhiphop.com, Concrete Loop and ?uestlove from The Roots. They all let me share their platform and for that, I will always be thankful.

Aaron: You are also a businessman, owning the company 6 Point Entertainment with industry veteran Jonnie Forster. What type of venture has that been for you?
B Howard: As a business person, it’s interesting to be involved in everything. You never know where most stuff goes. Having Jonnie there, because he’s got experience from working inside the major label system, collectively we have an edge and it makes the most sense for my individual career.

Aaron: Being a “Child of the Industry”, did you feel self-compelled to partake in the music industry or was it by free will?
B Howard: If everyone in your family and all those around you are doctors or mechanics, you’re most likely going to become one too. Music is all around me and that’s what I’m about. It was my own will and there have been many bumps in the road, but this is my path.

Aaron: In one of your past interviews it stated that your song “Dancefloor” has drawn comparison to the late Michael Jackson. How does it feel to be compared to a legend?
B Howard: I’m fortunate that the Jacksons helped shape me as an artist and a man. Michael will always be an influence on me. How can he not. He is the greatest artist the world has ever seen. His impact on the world was felt by many generations. I hope to make all the Jackson’s proud by realizing my own potential. I’m happy that they are there rooting for me.

Aaron: Very talented you are, definitely! How do you stay humble and in good-spirit being in such an industry that could be so vicious and cold-hearted?
B Howard: I don’t see it as a thing of staying humble, I think it’s just being who you are. There’s so many great people out there that have not been heard and I reflect on that and having the opportunity to be heard is something I respect and appreciate. I’m very thankful.

Aaron: Having some of the world’s greatest artist as your mentors, friends and associates, what advice would you share with aspiring producers and artist who are looking to be successful in the music industry?
B Howard: Never be afraid to listen to somebody who has done it. Go for it.

Aaron: I thank Tanay Jackson for reaching out to you to pursue this interview and I thank you and Jonnie as well. Would you like to add anything before we close?
B Howard: I’m working on a few songs I’m recording. With these songs, I’m making sure they are the best songs that everybody would enjoy that would be great for the radio and great for the clubs, songs that people will have fun with. Look for music to be released here in the States, Africa, Europe, and Asia real soon!

Aaron: B Howard, I thank you so much for this interview. I mean that!
B Howard: Thank you as well! 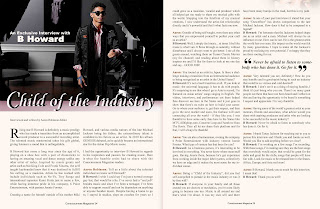